The Swiss team came to Des Moines, Iowa with a relatively young team for the inaugural ITU Triathlon Team World Championships, with the experienced Magali Di Marco, the Sydney Olympic Games bronze medallist, offering her support on the opening leg.

Di Marco started the Swiss ball rolling with a fine performance as the Australians got away to a flyer courtesy of Emma Moffatt who had won the Hy-Vee ITU Triathlon Elite Cup the day before.

Ruidi Wild held his own against strong opposition on the second leg but despite his best efforts Courtney Atkinson eked out the Australian’s advantage and the race looked to be over for the other nations, including Canada and USA.

That all changed on leg three as 2008 under 23 world champion Daniela Ryf blew Beijing Olympic Games gold medallist Emma Snowsill away with an astonishing display of power and strength on the bike. Having left the swim in Snowsill’s wake, Ryf proceeded to put her alpine training into practice as she overtook and put time into the triple world champion before the run.

The ever resilient Snowy was able to come back at Ryf over her strongest discipline and the two tagged their team mates for what would be an epic last leg.

The relatively unknown Lukas Salvisberg, still an under 23, faced the daunting challenge of taking on Brad Kahlefeldt, the Commonwealth Games champion and Tongyeong Dextro Energy Triathlon ITU World Championship silver medallist. But if the youngster was nervous, he didn’t show it.

During the swim the pair worked together to ensure that they stayed ahead of the chase pack, but on the bike it was a different story as the wily Kahlefeldt left Salvisberg to do much of the work as he looked to save energy for the finish.

Once through transition a short run to the finish remained, and the games began. Kahlefeldt repeatedly surged, dropping Salvisberg, before slowing down as he tried to intimidate his opponent, but some harsh words from Ryf put Salvisberg on the front foot as the young pretender went for home some 400 metres from the line.

Having spent all his energy Kahlefeldt was unable to respond and the awaiting crowds in the finish line, who were expecting to see a clear win for the Australians, were startled to see Salvisberg come around the final corner to take the tape and first place.

Queue the celebrations as the Swiss went mad. The champagne flowed as the young team took in the realisation that they had defeated the Australians, who included two Olympic medallists from Beijing and who had amassed a total of five world championship gold medals between them. It was quite a day to remember. 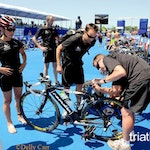 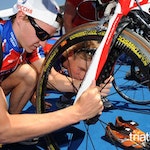 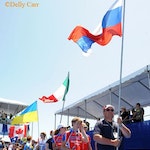 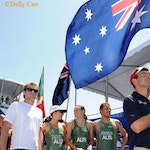 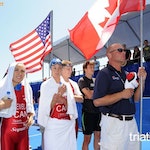 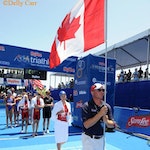 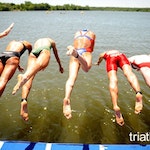 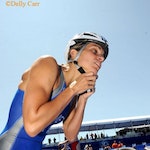 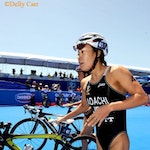 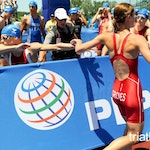 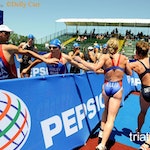 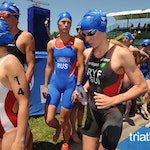