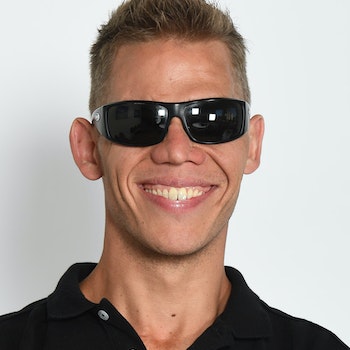 In 2005, during a training session of the Airmobile Brigade where I worked as a technical specialist, Daniel was involved in a serious accident and became completely blind. After several months in hospital, his rehabilitation began, with his major goal to become as independent as possible. Well equipped with his guide dog Benson, he knew he could transition back into an independent lifestyle.

With his great affinity with sport in his youth and later as a professional militant, he was in search of a new challenge. With coach, Chris de Korte, he would go to the 2012 Paralympic Games to compete in the rowing, but was unfortunately seriously injured during the last qualifying tournament. For his rehabilitation, he had to row indoors, which resulted in him becoming Dutch Champion of Indoor Rowing in 2011 and 2012. In addition to that, cycling was a passion of his. Before the accident, he would regularly take his mountain bike out, so he started tandem cycling during his rehabilitation. His current challenge is para-triathlon: consisting of swimming, tandem cycling and running. Most recently, he took the crown at the 2017 NED Paratriathlon National Championships.