Impairment Details
He was hit by a truck at age 29 which resulted in his right leg being amputated above the knee. “The truck went over my leg and stopped on my hand. It then went forward and crushed my leg again. The efforts to save my leg were unsuccessful and I had to make the decision that it should be amputated”

Start of sporting career
He started para-triathlon in 2005.

Reason for taking up this sport
He ran as a child and cycled for enjoyment before entering the Tour of Zimbabwe where he discovered his talent for cycling. After his amputation, he got back into cycling initially, but wanted a harder challenge so he took up triathlon.

Ambitions
To compete in the 2016 Paralympic Games in Rio de Janeiro.

Training
“I use my commute to work and back as part of my training, and I have to supplement it with early morning swimming training, running or long rides before work. Weekends are spent doing long rides or racing.”

General
IRONMAN
He first completed an Ironman race in 2006 after getting sponsorship from the event organisers. “I managed to do some swimming leading up to the event. Luckily for me I was able to use a racing wheelchair for the run in accordance with the rules of Ironman. For the two weeks prior to the Ironman I didn’t swim or ‘run’ at all. At the start line it was my first time using a wetsuit.” He then went on to complete two more Ironman races in 2007 and 2010.

OCCUPATION
He is a bike mechanic and has been a workshop manager at Cycletech in South Africa since 2012.

COMMITTEE
He served on the International Triathlon Union Committee in 2012, representing South Africa. 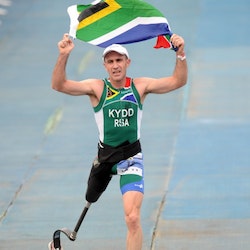