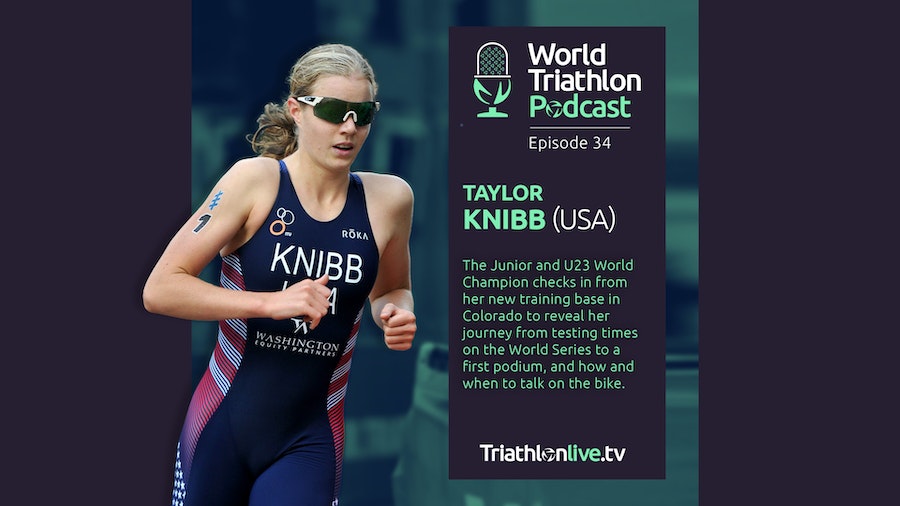 Taylor Knibb was a USA Junior National Champion in 2015 and World Junior Champion just a year later. In 2017, she became the youngest athlete to podium in the World Series, taking silver at WTS Edmonton as well as another Junior World title that year. In 2018, Knibb added the U23 World title to her list of achievements, joining US teammate Tamara Gorman as one of only three women ever to be crowned both Junior and U23 World Champion.

In the latest edition of the World Triathlon podcast, the rising US star talks us through her remarkable early trajectory and ahead to what is still to come in her career - you can download and subscribe to the podcast on Apple, Google and Spotify.

—
“Tamara dominated all the races I watched her race. It was just so fun to watch. And then soon I was racing my idol, but that also gave me a little bit more confidence when I saw I could swim with her. I could bike with her. So then when I went to Junior Worlds for the first time, In Edmonton, it wasn’t as scary. She definitely raised the bar and I don’t think it’s a rivalry, more showing each other what’s possible.”

Fast forward to Taylor Knibb’s last World Triathlon race, and there was an unlucky incident at the 2019 Santo Domingo World Cup where a penalty for a misplaced hat in transition cost her the gold, leaving Andrea Hewitt to run past and take the tape.

Looking back, she is typically candid about the situation, just as she was magnanimous at the time towards the situation. It is a mentality and attitude that further cements the idea that she is utterly confident her best is very much still ahead of her.

“I’ve had a good 16 months to be reminded of not being able to hit the bin with my swim cap. My goggles made it in, but not my swim cap. It is what it is. (Andrea Hewitt) is an awesome person. I have the utmost respect for her and if I had to lose to anyone, she’s not a bad person to lose to.”

As for her thoughts on returning to competition in Yokohama in May and the possibility of securing a place on the US Olympic team with a podium in the race, there is a philosophical approach to that first start line after so long out of competition.

“It could be quite an interesting situation. And I think that there’s actually kind of some, there’s something almost calming about that. Like, it just so out of your control and no one knowing where anyone is, it is kind of nuts because you have no expectations and it just like a big reset.”

There may not have been much in the way of racing for Knibb over the past year-and-a-half, but there has been plenty going on behind the scenes. Graduating from university and being able to focus solely on triathlon is among the biggest, and joining an international training group that includes the likes of USA teammates matt_mcelroy’>Kirsten Kasper and Matt McElroy, France’s Sandra Dodet and Iceland’s Edda Hannesdottir.

“I graduated May 2020, and so previous to that, I was in school and it was just a very different environment. I’m really enjoying the change and it’s nice to just forget the studies and concentrate solely on triathlon.”

“I had a triathlon coach all the way through college but then I was on the run team for all four years, and then I joined the swim team for my last two and I got to compete my final year. So it was a mix… each semester looked very different from the previous one. My coach experimented a lot and we kind of figured out what works. We learned a lot.”

Don’t forget you can watch all the action from WTCS Yokohama live on TriathlonLive.tv on 15 May.