Andrea Hewitt and Laurent Vidal are partners in life and shared the titles in Wellington today at the final round of the Contact Tri Series with national standard distance and ITU Oceania honours on the line.

Hewitt (New Zealand) and Vidal (France) won their respective races (albeit Vidal is not eligible as a Frenchman to claim the New Zealand or Oceania titles), in similar style, each overcoming world-class opposition in the final stages of the 10km run in blustery conditions in the capital.

Vidal kicked clear first of Australian Peter Robertson early in the run and then Kiwi Kris Gemmell at the eight kilometre mark while Hewitt shook Nicky Samuels and then Debbie Tanner to claim her first national title.

The key moment in the women’s race occurred late on the bike however, when Nicky Samuels, Debbie Tanner and Hewitt broke clear of a group of three others, including Wellington’s Kate McIlroy. The world-class trio led by 52 seconds heading into the run and from that point the others were chasing the minor money.

Hewitt proved the strongest in front of thousands who lined Oriental Parade and was delighted to claim her first national title in tough conditions.

“I am really, really happy with that today. It is my first Olympic distance race this year so this is great. Conditions were tough, the wind was in our faces on the way out but great on the way back each lap on the bike and the run.

Hewitt explained the surprising move on the bike when it looked as though a lead group of eight would stay together.

“It was on the last lap on the bike and Nicky went for it into the wind, first no one followed but then Debbie and I went and we got a gap on the rest and hung on and then took some turns to make that lead bigger.”

Hewitt knew that it was to be a good day for both her and Vidal.

“I felt strong on the run and made a move to get a good gap on Debbie. It was around that time when we crossed with a couple of laps to go I saw Laurent just after he had put a gap on Kris so had a pretty good idea he had held on to win.”

The day was a tough one though for Samuels, the Wanaka triathlete had suffered a cut to her foot during the run, caused by the lining of her shoe. Samuels removed the shoe and bravely ran on barefoot through the pain only to be penalized one minute upon finishing. Under ITU rules a triathlete cannot compete barefoot at any time during the run leg.

Fortunately for Samuels the one minute penalty saw her still finish third in the elite category, albeit just five seconds ahead of Kate McIlroy.

World number six Laurent Vidal was beaming after the race, confirming his love of New Zealand, describing himself again as 49% Kiwi but with the French media in attendance not prepared to go beyond the 50% mark!

The 26 year old is not eligible to take the titles but saw the irony in his win.

“No, I am not eligible to win either title today but I have not won a European Championship and here I am coming first in another continental title, it is cool!

“We had a great battle in Takapuna and I got dropped and got third but for three weeks I have been training with the Kiwis at Snow Farm and I knew I was in good shape for this time of the year, the training and the people were great.

“I felt good at the four kilometre mark and Kris is such a good athlete, he knows what he is doing so I have to watch him. But at six kilometres I was feeling good and decided I have to go, the first surge Kris answered but the second time was the good one, then I made the gap and managed to keep it.

“Kris and Ryan are both in good form and training well so I knew this was going to be tough, today I am the lucky one.”

Vidal was able to hobble back to the finish line to give Hewitt a quick peck on the cheek as she crossed the line.

“At Takapuna we were both third, today both first so it is great. I had to go the medical team to help with a blister but they allowed me to come out and see Andrea come home, so yes this was good.”

Gemmell was a comfortable second across the line ahead of Ryan Sissons who raced superbly to win the U23 title ahead of a horde of Aussies, with Ben Pattle a superb fifth overall and third in the elite men.

Gemmell was pleased with his work and despite finishing second, will have the honours of New Zealand and Oceania champion bestowed on him.

“I have no complaints today; Laurent was just too good and had the edge in speed over the final few kilometres. I felt really great, strong the whole way and felt like I could run at that pace for another hour. But I didn’t have the speed today which is typical for me coming down from altitude. This will set me up nicely though for the first World Champs Series race in Sydney next month so I am happy enough, albeit disappointed I couldn’t match Laurent today.” 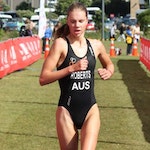 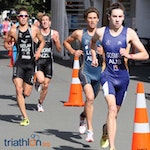 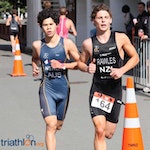 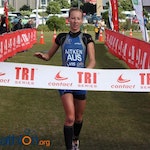 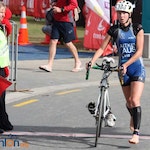 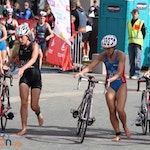 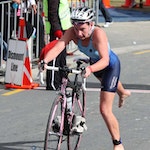 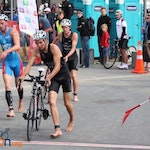 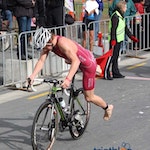 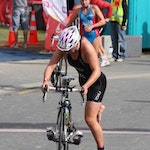 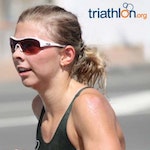 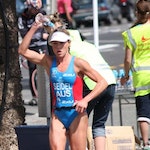