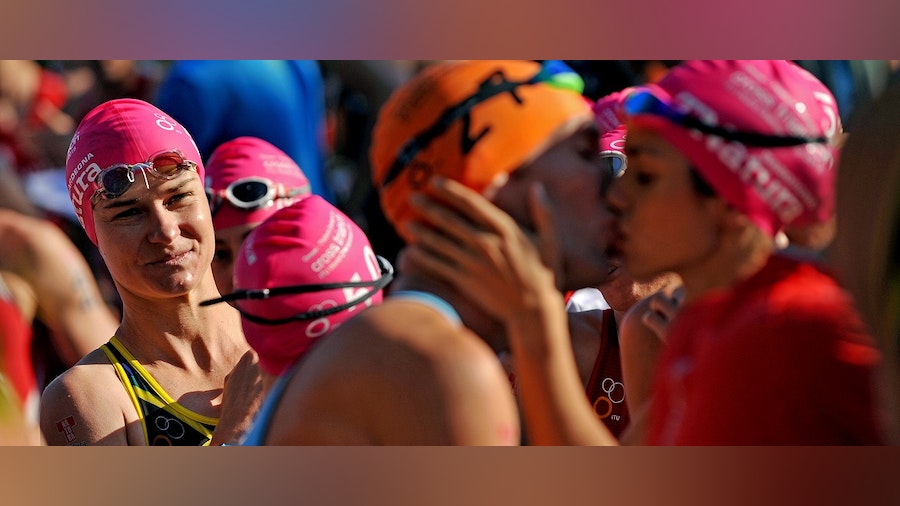 Roses are red, violets are blue. Swimming, biking and running is what led me to you.

Triathlon is a sport that takes time, effort and a lot of dedication, so how special is it when your love for the sport introduces you to the love of your life?

In honour of Valentine’s Day, we wanted to share with you some real-life triathlon love stories from people around the world, including two elite couples! Happy Valentine’s Day! 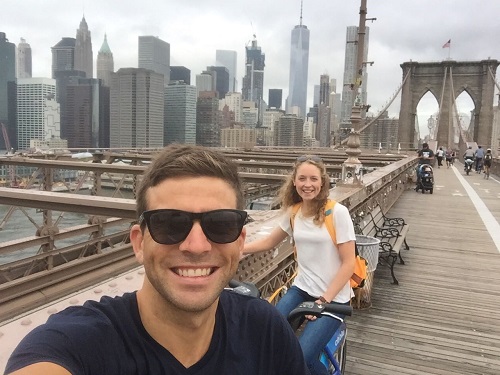 “We both won World U23’s at Auckland 2012, but it wasn’t until the end of the 2013 season that we met, at a French Grand Prix race in Nice. We’ve been great friends ever since, always catching up at various races around the world over coffee or dinner. It wasn’t until 2016 though that he plucked up the courage to make me his girlfriend. There’s some disagreement over our “first date” but we’re pretty lucky that triathlon takes us to some amazing dating locations, and allows us to travel and experience the world together.” 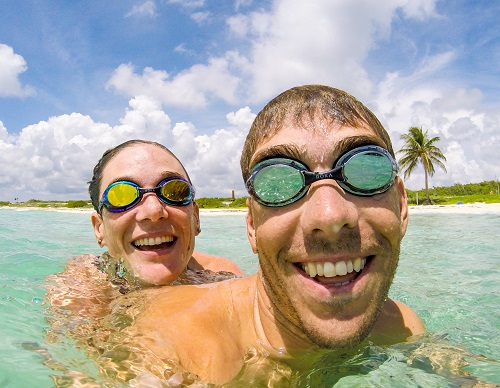 “I met Katie at a World Cup in Tiszaújváros, Hungry. I wasn’t planning on going to the after party, but my roommate (Joe Maloy) convinced me it was a party I couldn’t miss. I ended up going and found myself hanging out with Katie. We started to talk, talked all night and never stopped. We started dating a month later, got engaged after a year, and got married three months after we got engaged! We have currently been married for a little over two years now and train and travel together full time. The longest we have been apart in the last two years is seven days, and we just finished filming our episode of the TV show Tiny House Nation. We plan on living in the 370sq ft house throughout the next Olympic cycle. True Love :)” 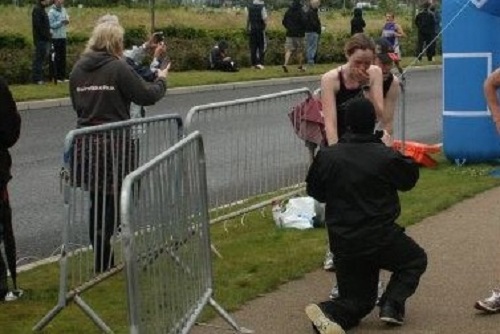 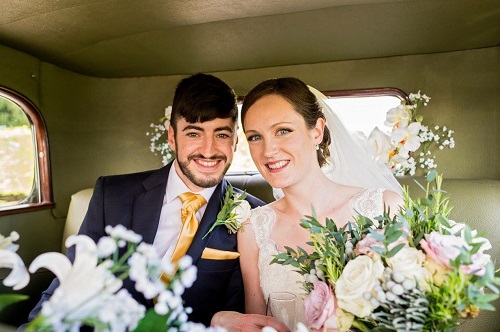 “My now husband proposed to me on the finish line of my first Olympic distance triathlon back in 2012. It was a cold, grey rainy June day and the race was a bit of a slog but I was really pleased to have beaten my predicted time by over 10 minutes. I had just turned around to get a much needed drink, turned back and saw him on one knee holding up a beautiful diamond and sapphire ring! The race commentator noticed what had happened and announced it over the microphone so everything be near by clapped and cheered for us. We have been happily married for 2 and a half years and now have a beautiful baby daughter. Valentines Day marks 11 years together so it is a very special day.” 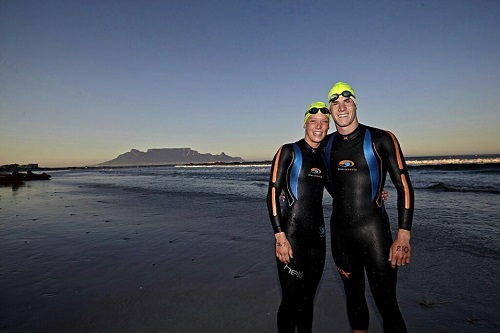 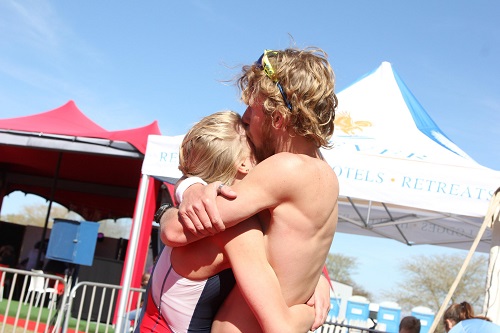 “I met Rudolf Naude in Beijing at the Dextro Energy ITU Grand finale in 2011 we’re both from South Africa but live almost on opposite ends of the country… We met up again on a tour to the ETU European cup in Holten in 2012.Then we had our first kiss at the ETU European cup in Tiszaujvaros in 2012. He then asked me to be his other half at the ATU cup in Troutbeck, Zimbabwe in 2012. We are world wide, but my love for triathlon led me to the love of my life, what more could I want!”

And also sending a special Happy Birthday shout out to Rudolf on his Valentine’s Day birthday! 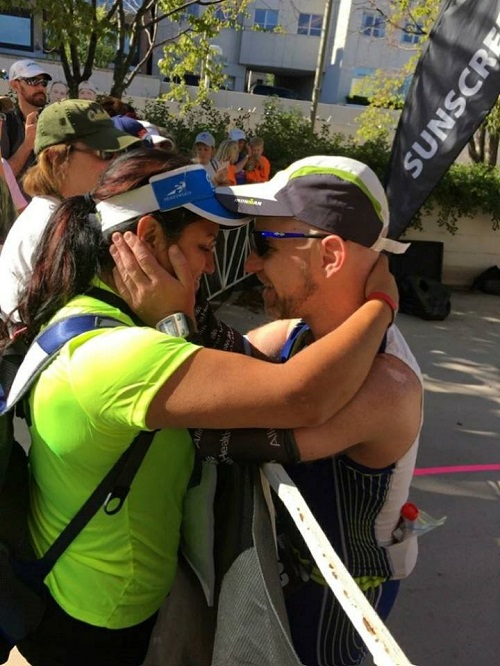 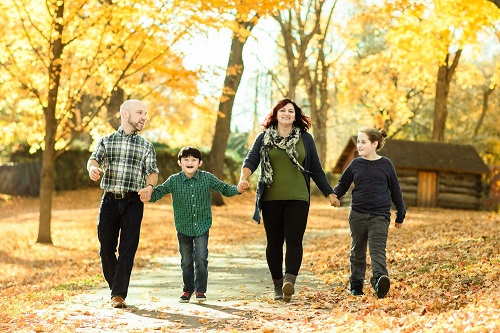 “I didn’t meet my fiance Tony through triathlon. In fact, when we met at our workplace in Minneapolis in 2007, I barely knew what a triathlon was, let alone had any interest at all in doing one. But fast forward a few years, when we started dating in 2013, we quickly discovered that we were building and maintaining our relationship through triathlon. It might be a stretch, but you could say that our first “date” was me driving an hour and a half to watch him do a sprint triathlon. We both were active people and did running races, so we did a few of those together throughout the first year of dating, and he did a handful of triathlons that I attended as a spectator. I quickly learned that in order for me to keep up with his training schedule (or to see him at all!), I’d have to train too - so I started doing triathlons myself in the 2015 season. And when he completed his first Ironman in Madison that September, he proposed just after the finish line. Our wedding will be September 3, in Madison, at the Monona Terrace - where he finished his Ironman and where he proposed. And thanks to a clever friend, we’ve adopted the hashtag of #TriTheKnot for our big day.

So even though triathlon isn’t where we began as a couple, it’s definitely had an influence on who we are as a couple - and a family! I have two sons: Jace is 12 and he participates with us in races. Cade is 7, and is special needs but is the driving force and motivation for us when we run/tri for our racing team, Miles for Smiles - a racing team that raises money and awareness for his disability, Angelman Syndrome. Our family is excited to see where our triathlon adventures will take us!”