Triathlon shows its growth in the Rabat African Games 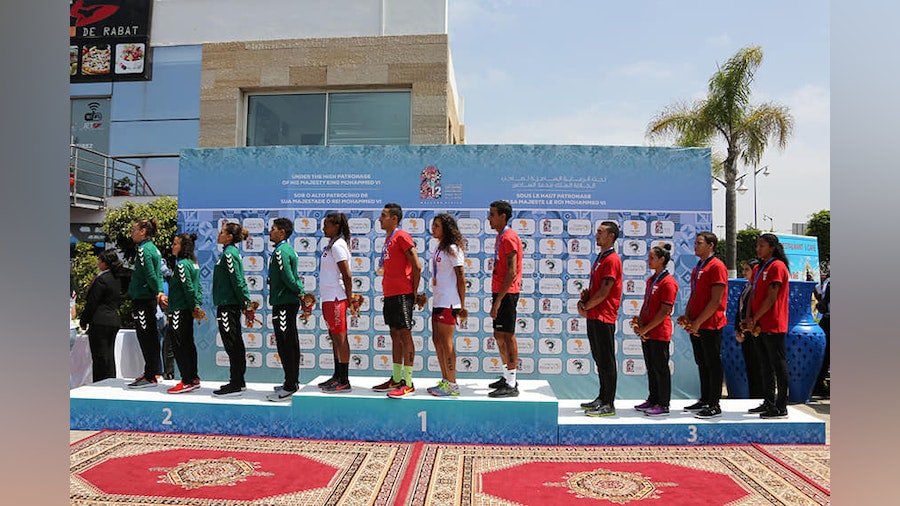 With athletes from 12 different countries and 7 teams competing in the Mixed Relay, triathlon was displayed at its best at the 2019 African Games in Rabat. “It is fantastic to show how our sport has evolved in the Continent in the last few years, having so many young athletes competing here and showing the world that our sport has tremendous potential in this region”, said ITU President and IOC member, Marisol Casado, who enjoyed the events and had the chance of congratulating in person Morocco’s Badr Siwane and Egypt’s Basmla ElSalamoney for their victories, as well as Team Tunisia for their first-ever Continental title in the Mixed Relay.

Over 7,000 athletes from all the 54 nations from Africa gathered in Rabat for the 12th edition of the African Games (formerly All Africa Games) from 19-31 August. Athletes compete for medals across 26 sports, including triathlon, which was showcased in the stunning beach of Rabat for both the elite individual races and the Mixed Relay, contested over a sprint distance.

To much delight of the hundreds of local spectators, Badr Siwane was accompanied crossing the finish line by another young Moroccan athlete, Mohammed El Mehdi Essadiq, while Bronze was claimed by Algeria’s Oussama Hellal.

In the women’s race, victory was for Basmla ElSalamoney, the 2018 African Triathlon Junior Champion and 2018 and 2019 Pan Arab Champion, who was followed in the finish line by two athletes from Zimbabwe Laurelle Brown -the 2013 African Junior champion- and Andie Kuipers.

For this edition of the African Games, spectators and athletes could enjoy the latest addition to the Olympic Programme, the Mixed Relay, which showcased seven teams for a fast and furious race that ended up with Team Tunisia claiming the title. Syrine Fattoum, Ons Lajili, Mohamed Aziz Sebai and Seifeddine Selmi proved to be the best team all-around, with Team Algeria claiming silver and Team Egypt crossing the finish line in third place, just ahead of Team Morocco, in the bittersweet fourth position.

“The event was just fantastic, the athletes proved that the level of triathlon in the Continent has improved substantially in the last couple of years and we are really confident that with the help of all our African National Federations and our Development programmes in the region, we will be able to continue growing our sport in Africa and have even more successful events in the near future”, said Casado.