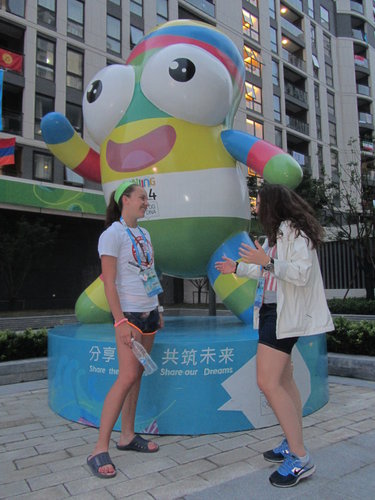 Depending on how you measure, Nanjing is not even in the top 10 biggest cities in China. But for USA triathlete Stephanie JENKS, of Aurora, Iowa, such rankings mean little.

“The [population of the] town I live in is 185 people. Our main street is a gravel road and the paved road going through, that’s not really busy at all,” JENKS said.

So, after a quick hop across the Pacific Ocean, the difference at the Nanjing 2014 Youth Olympic Games is rather confronting.

“It’s huge. All these people. It’s kind of overwhelming. But it’s a great place. I like it.”

JENKS, whose ability on the running track is such that she also competes in athletics at a high level, struggles to find appropriate competition in her home town for practice sessions.

As a result, she has to practise with the boys.

But perhaps racing against bigger opposition is appropriate, given Aurora’s city motto: A small town with a big heart.

JENKS will compete at the Games on her 17th birthday, on Sunday, August 17 and believes a podium finish is realistic, largely thanks to her strength in the run.

It might even pay to compare her triathlon times to what is achieved in the track and field events.

For now, triathlon is number one, and her ticket to a life-changing visit to China.

But, as is clear, such rankings mean little to JENKS.

Thanks to the Nanjing Games New Services for this article.