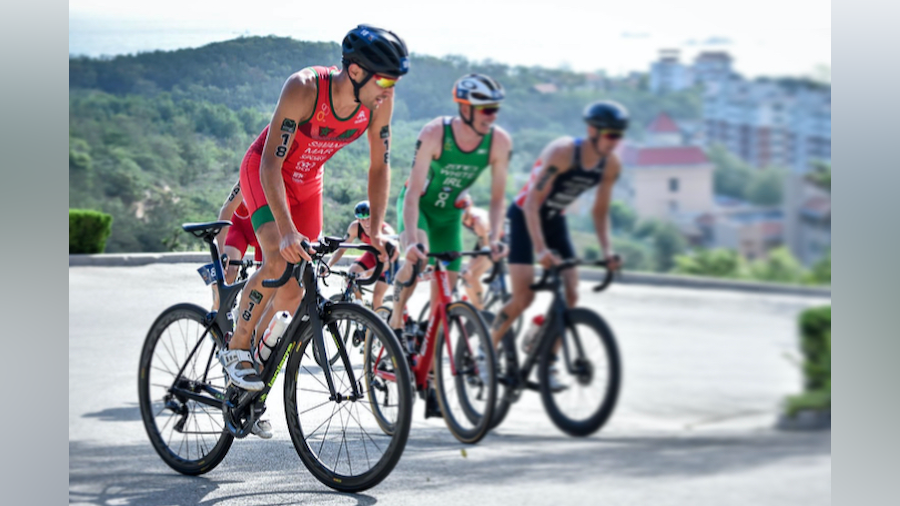 Morocco’s Badr Siwane produced three brilliantly consistent segments to be crowned the African Games champion back in August in his native capital city Rabat. A member of the ASICS World Triathlon Team, the 25-year-old travelled with the squad to Nur-Sultan and Weihai this year, the latter providing his first top-30 finish at World Cup level and an important boost at the end of a busy year of racing. We caught up with him to look back over the events of 2019 and find out a little more about what makes him tick…

What has been the high point of 2019?
The highlight of my season was the African Games, the African sprint triathlon championship held in Morocco in August. Because it was a very important competition for me and for Morocco, I also wanted to show that I could return to the front of the African stage. I had a bout of food poisoning early in 2019, which delayed my start to Olympic qualification, so the African Games was an important moment for me to show to Africa what I can do.

And the low-point?
The low point was the trip to Durban where I got food poisoning and the subsequent Olympic distance African Championships in Mauritius! It was a bad time and a black spot on my season, but I still did my best to try and win a medal.

What were your specific pre-season targets and did you hit some or all of them?
My objectives before the season was to make progress, which thanks to my coach Alexandre Delort I did and from March I gained confidence in myself because before that I didn’t really have a coach. He has helped me really push myself to new levels.

Is there an element of your racing you will work on in the off season and introduce at the start of 2020?
During the winter season I will work a lot with my coach on the mileage running and cycling. Before this year I did not run so much but with the coach we have increased the distances a lot.

If you could change one moment from the 2019 season what would it be and why?
I would like to forget the troubles I had between October and December last year and then the food poisoning in March, but I managed to refocus now and have the coach to motivate me.

What personal goals are you setting yourself for 2020?
The goal for 2020 is, of course, to qualify for the Tokyo Olympics in the New Flag position. But if I cannot, then I know I have to work hard and make a success of the Paris 2024 Olympics. I would also like to be able to deliver a great World Cup race with the Asics World Triathlon development team and put in a really good performance there.

What has been the song you have played most on your travels this season?
The song that I play the most during my travels is Kery James’ Banlieusards or Niska for French songs & Dr. Dre - of course! - in English. I often listen to Zina Babylone when I have to sleep on the plane ha ha.

Do you have a go-to TV series or film when you’re on the road?
The TV series that I watch is Casa de Papel (Money Heist in English).

What are the best and the most challenging things about so much travelling and racing around the world?
The hardest thing is jet lag and then, and everyone says it, but it’s always having the stress of not getting your baggage on arrival.

Which athlete has impressed you most this year?
I would say Vincent Luis, because he was in my club in France but also just because I’ve known him for 10 years and I saw the evolution, and it’s really crazy. He is really strong. I really enjoy watching him race.

Where was your favourite race venue(s) in 2019 and why?
My favourite places in 2019 was of course Rabat in Morocco, but otherwise I really liked Weihai. It’s a beautiful city, an amazing country, and it was the first time for me in China.

What was the biggest thing to happen to you in 2019?
The biggest thing was my two degrees in Sport and Audio-Visual, and the integration in remote schooling of communication marketing. And also meeting my new coach, because it has changed everything in my personal life just as much as it has my life as an athlete.