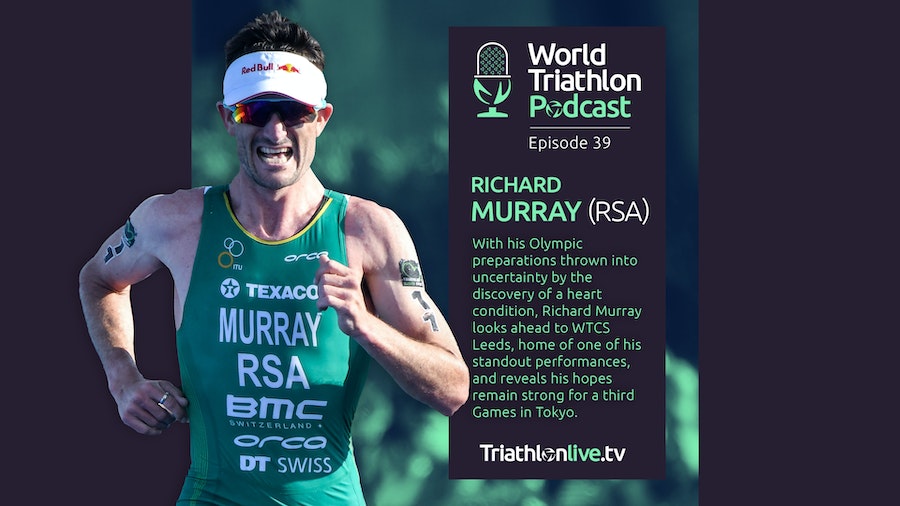 At 32, Richard Murray was preparing for a third Olympic Games appearance when, at the start of the year, that was all turned upside down as a doctor told him he should consider hanging up his trainers. Atrial Fibrillation was the diagnosis, a condition that causes an irregular heartbeat and one that he first noticed coming on after a pool session back in January.

In the latest edition of the World Triathlon Podcast, hear how the South African has been forced to dial back his training, come to terms with the possibility that Tokyo may not be the best goal in terms of his health and maybe even start to think about a future off of the blue carpet.

You can listen to the interview in full on all the major platforms including Apple, Google and Spotify.

—
“In my swimming goggles I can actually see my heart rate and everything while I’m swimming and so I know what range I’m normally sitting in with my heart rate and all of a sudden it just spiked to 160, 180. And I was just warming up so I thought maybe something is incorrect in the technology or something but it stayed the same and I something in my chest didn’t feel right. It kind of felt almost like I had a bit of a muscle spasm in my chest.”

“I mean, as an athlete, you kind of, I wouldn’t say get used to dealing with the little small problems, but definitely you have to overcome things, especially if you’re tired and training and you’ve got to push through and mentally. Now it’s kind of the opposite, and I’ve got to be really careful with myself and not overdo things… but I’m still preparing my Olympic bike!”

Training has obviously had to be stripped back for the time being and, as he did for much of 2020, Richard has found himself having to prepare for ‘what might happen’.

“So the tricky thing is that I know to be on a hundred percent form has kind of gone out the window and I think as an athlete, you know where you are at any given moment and so realistically I know that I’m not going to be on top shape. We’re kind of waiting for the next couple of weeks or to find out when I’m going to get the procedure done but I think, as a professional athlete, the words ‘mild’ and ‘easy’ are very different from the average person.”

As Richard’s wife Rachel Klamer prepares for WTCS Leeds, he will have to be watching from home on TriathlonLive. It is a race that saw one of his greatest performances back in 2018, leading out of T2 to outrun the likes of Mario Mola and Vincent Luis to take his first Olympic-distance Series gold.

“It was a pretty amazing day, and I felt probably the best that I’ve felt in a race. I was off at the front and I expected everyone to catch me and then they kind of just didn’t. And then I thought, well, this is 5km done, maybe I could take this. Mario ended up like almost coming back at me in the final kilometre or two and my coach was firing ‘Mario’s coming back, you really have to go all in now!’

“You know, both Brownlees were obviously racing there as well so it was like home turf, which is even bigger bragging rights. I remember when Alistair took me down in Cape Town. It’s something you never forget, when your triathlon nemesis takes you down in your hometown.”

You can listen to the full podcast with Richard Murray below and watch WTCS Leeds on Sunday 6 June on TriathlonLive.tv.