They were followed by New Zealand in 1:18:14, earning the Oceanic nation it’s highest finish in the championship race. USA clocked in next at 1:18:19, which represented its first ever medal in the Mixed Relay World Championships.

Loeschke, who raced the final leg for the victorious German team said: “We had an amazing day with lots of ups and downs. You only get that in a team relay. Anja - we call her our lucky girl - got us off to a great start.”

The German team also had Haug to thank for playing a crucial role in their win. Haug had won the women’s race on Saturday but still found enough energy to close a big gap during her leg to hand over to Loeschke in second place, behind USA.

“I was spot on,” Haug said. “I didn’t think, I just pushed as hard as I could to make the gap as small as possible. That’s racing - going all in.”

Great Britain, who won the event in 2011 and 2012, were hot favourites going into the race after each member of their team stood on the podium in their respective races on Saturday. And it looked like they would make it a hat-trick of wins after Jodie Stimpson and Alistair Brownlee had created a strong lead in each of their 300m swims, 6.6km bike rides and 1.6km runs before Alistair handed over to Non Stanford with a 17 second lead.

Racing solo didn’t affect Stanford in the water, but the chasing pack started working against her on the bike and had made up a few seconds before two incidents turned the race on its head.

Firstly, news broke that Great Britain would have to face a 10-second penalty after an infringement by Alistair during his leg. But before that was taken, Stanford crashed towards the end of her bike leg to end hopes of further success for Great Britain in Hamburg.

Great Britain’s misfortune enabled Gwen Jorgensen (USA) to use her powerful run speed to overtake Haug and give the US a slight lead ahead of the final relay member. Cameron Dye (USA) was first on the bike, with Germany, New Zealand, Australia and France all in contention.

Dye didn’t race in the elite men’s race on Saturday but his freshness wasn’t quite enough as New Zealand’s Ryan Sissons hammered to get the Kiwis back in podium position. Despite starting with a deficit, Sissons caught Loeschke on the swim. But a tricky transition put Sissons back in position to play catch up, which he did quickly on the bike.

The Kiwi and the German rode together, working to reel in Dye. While the American had a lead on the run, Loeschke took the initiative to power ahead and claim a historic win for Germany in front of an ecstatic home crowd.

Behind him, a determined Sissons also overtook Dye, with it earning New Zealand silver and leaving the US with bronze. 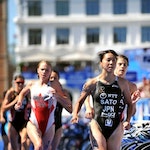 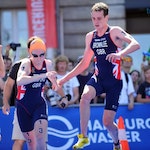 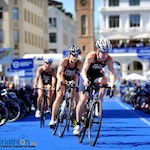 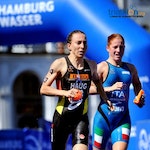 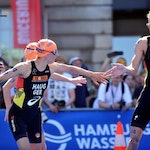 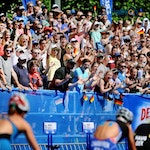 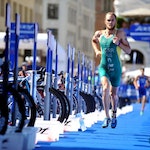 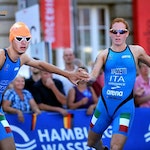 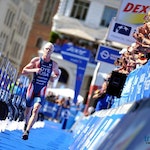 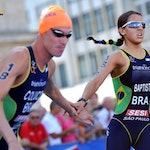 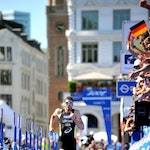 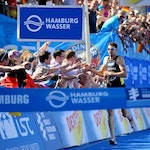