Frodeno Sprints to Victory in Seoul

Jan Frodeno, the 2008 Beijing Olympic gold medallist, won a thrilling sprint to the finish over Australia’s Courtney Atkinson at today’s Dextro Energy Triathlon ITU World Championship Seoul. Frodeno and Atkinson broke away from the field immediately after exciting the second transition and ran side-by-side for the entire 10K run until the German sprinted away at the finish. Frodeno and Atkinson both finished with an amazing 10K run split of 29:08. Australia’s Brad Kahlefeldt finished third, posting a 29:32 run split.

Sixty-eight men took to the chilly water of the Han River to kick off round two of the 2010 Series, with all the usual suspects moving toward the front. The Russian team, led by fourth-place Sydney finisher Dmitry Polyansky took to the lead, along with Spaniard Javier Gomez, Monterrey World Cup champ Joao Silva of Portugal and Matt Chrabot of the United States. Gomez led the way out of the swim, but he had plenty of company as a group of almost 50 athletes joined him heading into T2.

Frodeno jumped to the front at the start of the bike leg and looked to push the pace, but few others seemed eager to use up their energy reserves too early and the group rode through the first lap at a relaxed pace. Spanish super-biker Ivan Rana tried to force a break on lap two, but the former pro cyclist was quickly caught by the big group, which had swelled to 57 men. American Mark Fretta was the next to attempt a break, but he too was eventually caught by the peloton and the group of 57 made their way into T2 in a tight bunch.

Atkinson immediately stormed to the front out of transition and opened up a gap of about 10 metres on the group behind him.

“I just wanted to hold on until the finish line, I had a bit of confidence in my sprint. It was a nice long finishing straight which really played into my favour.”
Jan Frodeno

“It wasn’t planned on my part to take off like that,” Atkinson said. “But when I found myself in a good spot out of transition I decided it was a good idea to get to the front and spread things out.”

Frodeno was the only one able to keep pace with the fast-running Aussie and pair finally came together about two kilometres into the 10K run.

“Courtney went out really hard on the run and it was tough to catch up to him out of transition,” Frodeno said. “When I finally did, we started working together very well and were able to build a nice gap on the rest of the guys.”

The pair ran side-by-side for the remainder of the run, building their advantage with each passing lap. Kahlefeldt ran solo about 20 seconds back of the lead pair.

“I just wanted to hold on until the finish line,” Frodeno said. “I had a bit of confidence in my sprint. It was a nice long finishing straight which really played into my favour.”

As the pair of leaders headed toward the line, Atkinson was the first to open up the sprint, but the Olympic champion was quick to respond, blowing by Atkinson with about 30 metres left to run to take the win. Kahlefeldt finished 28 seconds later to grab the final spot on the podium. 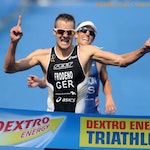 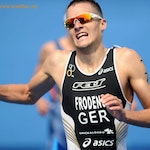 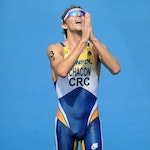 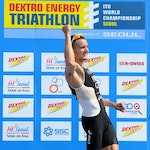 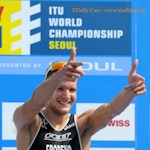 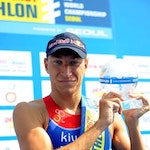 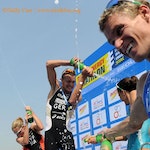 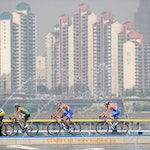 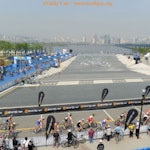 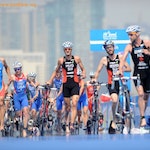 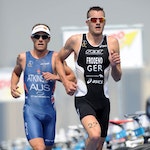 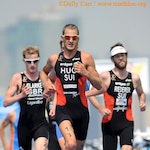