Csongor Lehmann: The boy from Tiszy with triathlon in his blood 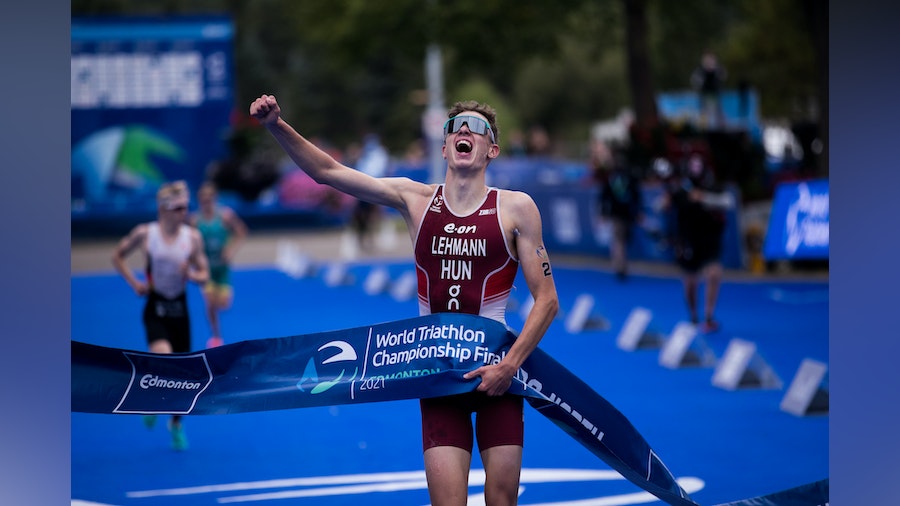 Fresh from his annual off-season skiing trip in the mountains of Hungary, Csongor Lehmann is ready to hit 2022 running. And swimming, and biking. The star of successive Junior and U23 World Championships, with gold - silver - gold in Gold Coast, Lausanne and Edmonton respectively, the 22-year-old also confirmed the step up to elite in style in 2021.

Lehmann hails from Tiszaujvaros, the small industrial town with big triathlon credentials as the home of the sport in the country, a town where the likes of Brad Kahlefeldt, Jan Frodeno, Gwen Jorgensen and Emma Snowsill have all done battle over the years on the then top-tier World Cup circuit.

“You could say it’s a sleepy town, but you can also say that it’s a really special town… this sport has been part of my life since I was born here,” he says. You can listen to the full podcast on Spotify, Apple and Google and watch Csongor Lehmann along with the likes of Vincent Luis race the indoor Europe Triathlon Cup Lievin on TriathlonLive.tv on Saturday 12 March.

—
Csongor Lehmann has just come back from the Tiszy triathlon clubhouse where he was looking over the posters from each year that a World Cup has been hosted in his town. Missing out due to the pandemic has clearly left a big gap in the calendar for an event that goes back to the mid-90s when his father, Tibor - now his coach - was still racing.

“I’ve always really liked the spirit and the passion people share for the sport. When I was a kid, the World Cup was like Christmas for us we looked forward to it so badly. It was big watching those guys race each other from right next to the course, then we’d work the aid stations and it was like a dream come true when they’d take the bottle from us. I knew I wanted to be on the top like them.”

After many European Cups there, and a storm-aborted 2018 event, Csongor finally had his first experience of the pointy end of World Cup racing at the 2019 Tiszy, where he was leading with 500m to go before being taken down the straight, finishing an agonising one place off the podium in fourth.

“I was quite a rookie there, and I knew I couldn’t really win but the crowd pushed me to my limit. I was running with big names and just missed the podium. I was disappointed but it was my first World Cup with the big boys and in my hometown, and got me thinking if I work my hardest, I can hit the top as well.”

Right now, Lehmann is learning the importance of easing off just as much as pushing and discovering his limits. Having a coach who knows him as well as his dad can be a big help in that, though it does inevitably mean the sport can become a 24/7 impact on life and a day’s training isn’t always left in the clubhouse. Moving into his own apartment had a big impact on his ability to switch off. Play video games, listen to music, even hit the local market to find something unusual for his shelves.

“I think my strength is I can really dedicate myself to my goals and be really focused on them… for the year and the long term as well. But maybe a weakness is I should be more focussed on the recovery. It’s the smart choice to slow down a bit. We are planning for the long term. What we want isn’t coming in the next days. I’m really into vinyl and like to listen to music on my record player and I’m kinda into antique things, I’m collecting them.”

And once again the theme of patience comes around ahead of the ‘breakthrough’ season. After a Junior World title in 2018 and U23 World title last year, it would be all too easy to continue joining the dots straight to the WTCS podium. Taking a first World Cup podium in Karlovy Vary was another big step in his career, strong results at WTCS Hamburg, Leeds and Abu Dhabi in 2022 likewise. He remembers his first taste of top-tier racing.

“Yeah, it was quite the experience. My first one in Yokohama, I got burned a little bit there! But I think I needed that race too, to see how fast these guys started and to know what to expect from a race on this level.”

First up for 2022 will be the Indoor Championships in Lievin, racing along with his brother Bence as well as the likes of two-time World Champion Vincent Luis. Outrun on the same course by Chris Pelham last time out, it’s a race Csongor is looking forward to.

“Chris Pelham was so quick on that run and that race is still a big memory for me. It’s good to start with these kinds of super-sprint races, and I’m planning for the Italian Grand Prix circuit too. I’m excited for the format and that Vincent will be there. It is always a big honour to race a World Champion.”

You can listen to the full interview below and watch the event from Lievin on TriathlonLive.tv