The Australian duo of Ellie Salthouse and Michael Gosman finished on top of the podium at the Oceania Youth Olympic Qualifier in Canberra and secured a position for Australia on the start line in Singapore.

Salthouse was ecstatic with her performance. “It’s so exciting to be going to the Youth Olympics. My coach, Warwick Dalziel, has had me doing plenty of midday training sessions to get used to the heat and it seems to have paid off. It was really hot out there but I couldn’t be happier.”

Canberra’s Michael Gosman won the prized Youth Olympics spot in the men’s race. “I struggled to stay on the back of the pack in the bike, so that was a bit of a worry, but you learn so much from these sorts of races,” he said. “The Youth Olympics . . . wow. I was just trying to concentrate on the process during the race, but now that I think about it that should be pretty cool!”

Although Australia has claimed the direct Oceania spot for both women and men for the Youth Olympic Games, New Zealand, the only other nation on the Field of Play in Canberra, still has the opportunity to send athletes to Singapore in the case that two of the IOC Universality places would be returned to the Continental Qualifiers.

The Youth Olympic Games will take from August 14 – 26 in Singapore. For more information please visit http://www.singapore2010.sg 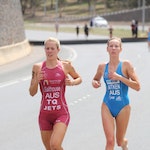