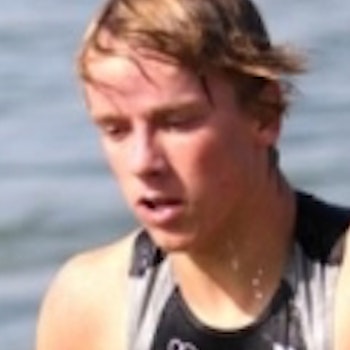 I have always loved running, and enjoyed swimming, so I thought I would try all three sports together. My first triathlon was at the age of six - I competed in a local Iron Kids Triathlon and have never looked back. My family has a history in sport: my father was on his high school wrestling team, my mother was on her high school swim team and has a black belt in taekwondo, and my grandfather was on his high school runnning team. The people who have had the most influence on my sporting career are Andy Potts and my mom and dad. Andy Potts is an amazing athlete, and meeting him and competing with him in the Escape to Bermuda Olympic Triathlon in 2007 was incredible. My mom and dad have also been very influential and supportive. They have pulled me out bed when it’s still dark outside, and driven me to every event and training session for the past 11 years.

I currently train in Bermuda, and during an average training week I swim eight hours, bike 12+ hours, and run for four hours. My personal best swim time (1500m) is 19:48, bike (40km) 1:01:37, and run (10km) 38:21. I’m currently the assistant coach for my local junior triathlon club, and organizer of school cross country running club. My favorite ITU race has been the Apple Triathlon in Kelowna, BC, in 2009, as this was my first overseas event, and I had my best swim time so far in my career. My triathlon goal, in the short-term, is to place in the top six at the Youth Olympic Games. In the longer term, I am striving to participate in the 2012 Olympics; if not, the 2016 Olympics.

The biggest obstacle that I have overcome is that I used to be extremely shy, and have worked hard at overcoming this. Something that the triathlon world doesn’t know about me is that I like playing charades.