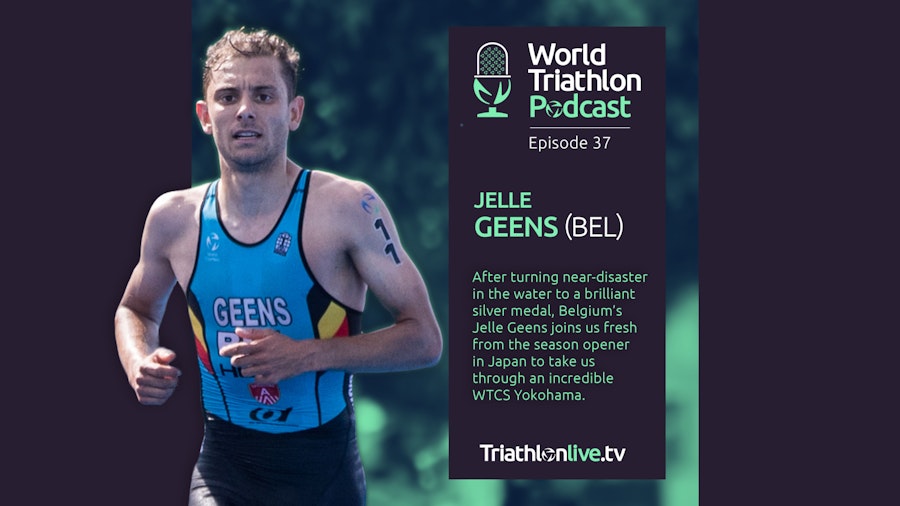 The action didn’t let up for a moment in Yokohama as the first racing of the 2021 World Triathlon Championship Series and Para Series got underway in Japan. Important new health and safety protocols may have been in place, training restricted and spectators asked not attend, but once the start horn sounded, there was no mistaking the thrill of top-tier triathlon at its very best.

Belgium’s Jelle Geens was a gold medallist at WTS Montreal in 2019, bronze medallist in Hamburg last year, and at the weekend in Yokohama, he managed to recover from a directional error at the start of the swim to earn an valuable silver. He dialled in on route from Tokyo to Girona to look back over the race in the latest episode of the World Triathlon Podcast. You can listen to the full interview via the usual Apple, Google and Spotify platforms.

—
“I’m in Paris at the airport airport after a long flight from Tokyo and now it’s a five-hour layover and then a flight to Barcelona and then a drive home. My muscles are a bit sore but I’ve had worse,” summarised a happy but tired Jelle Geens from Charles de Gaulle airport. It was Sunday evening, there was still a flight and a drive between him and his bed, but there was plenty to reflect on after the first Series race of 2021. Not least a pretty difficult start to the race.

“Obviously the swim has always been and is still my weakest leg but this time it was really terrible. I think I made a bit of a tactical error in the beginning where I first joined the right group. Then at one point something my mind told me to join the left group, so I went all the way to the left and then ended up being at the back there and that didn’t go straight to the buoy so we swam a bit extra. I was quite far behind.”

“It’s always hard to know exactly where you are during the swim because you don’t see so much and it’s not so obvious which position you are, but this time I was quite sure I was far, far, behind. Luckily it’s only one third of the triathlon.”

The slip could have been down to many things after the long off-season, and there was plenty to think about with the unorthodox preparation for the race, where the bubble meant athletes had to keep to their rooms and train in specified slots in a specially prepared room. Geens is in no doubt that the athletes were more than happy with the extra layers to negotiate just to be able to get back to racing.

“Just before we left Yokohama I was talking with Marten (van Riel) about how everything was perfectly organised and everything was arranged and it wasn’t a race preparation or the race week we normally have… but it must have been a huge effort by a lot of people to set all this up and to organise all of this. The people of our group that I spoke with were all going into this week saying whatever happens, happens, and we’re just gonna go with it.”

After that extended off-season, Geens clearly felt well prepared going in to such an important year.

“I would say I’ve had the best winter I’ve ever had with no injuries, I haven’t been sick. I basically didn’t miss any training. I felt comfortable in my fitness and I was confident going into it, but it’s always nice to see it executed during a race.”

After that less-than-ideal start, Geens found himself leading out of T2 alongside Jonas Schomburg, and after the first lap, it was just Kristian Blummenfelt and Alex Yee that were able to maintain the pace.

“Every lap you had this little out and back section where you could easily see the others behind and the coach Nick was giving updates. I thought maybe Vincent Luis would try and bridge up at some point but then as it went on I realised if they’d had the legs to do that, they would have already done it.

“Seeing someone like Alex Yee drop off because the pace was too fast was definitely a confidence booster… and Kristian was breathing hard. Then he accelerated pretty fast and I hoped he wasn’t able to keep that pace throughout that last lap but he obviously did.”

You can hear more from Jelle Geens in the full interview from episode 37 of the World Triathlon Podcast.