by Erin Greene on 28 Sep, 2014 03:04 • Español
Sven Riederer (SUI) scored his second World Cup win in his long career with a blistering run in equally as hot temperatures at the Alanya World Cup on Sunday. Alessandro Fabian (ITA) crossed...

Sven Riederer (SUI) scored his second World Cup win in his long career with a blistering run in equally as hot temperatures at the Alanya World Cup on Sunday. Alessandro Fabian (ITA) crossed over after the 2008 Olympic bronze medallist followed by David Castro Fajardo (ESP), who made his first World Cup podium.

After a storm desolated the start pontoon on Saturday evening, the men began their day with a beach start two-lap swim of which Steffen Justus (GER) led the first lap. Marco Van Der Stel (NED) took over the lead, with Dmitry Polyanskiy (RUS) staying on the hip of the top man.

More than half the men’s field tore through the first two laps together with a small chase of 13 headed by Ben Kanute (USA) trailing just 20 seconds. But a crash at the caboose of the long train split the field and pushed the chase further back. It ended any hopes of the chase bridging up and also caused pre-race favourite Polyanskiy to lose a minute on the leaders.

But a whopping 42 men remained united in the lead peloton for the remaining three laps. With the winner to be decided on the run, Under23 World Champion Dorian Coninx (FRA) charged out of transition. But with a deep field of top runners in the race, getting away was not in the cards for the Frenchman.

A group of 15 men headed by Tom Bishop (GBR) formed after the first of four run laps. By the second lap that size dwindled down to 10 with Fabian at the helm. Middway through the 10km course, Riederer made his move and dropped the men. While the French team had four men in the top 10 with two laps to go, winning a medal wasn’t to be. 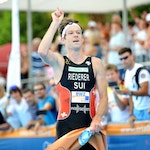 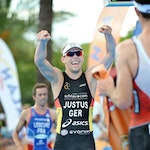 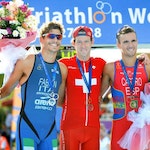 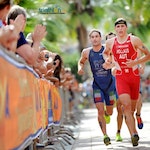 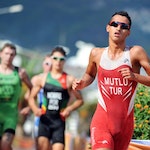 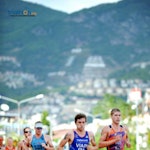 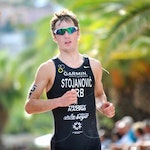 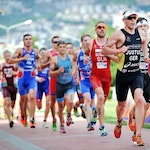 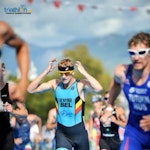 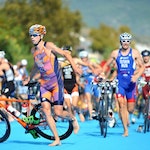 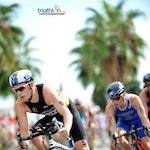