With the debut of paratriathlon in the Paralympic Games in Rio de Janeiro this summer, our sport’s top paratriathletes will prove to the world that the impossible is possible and that ‘no’ is never an answer. 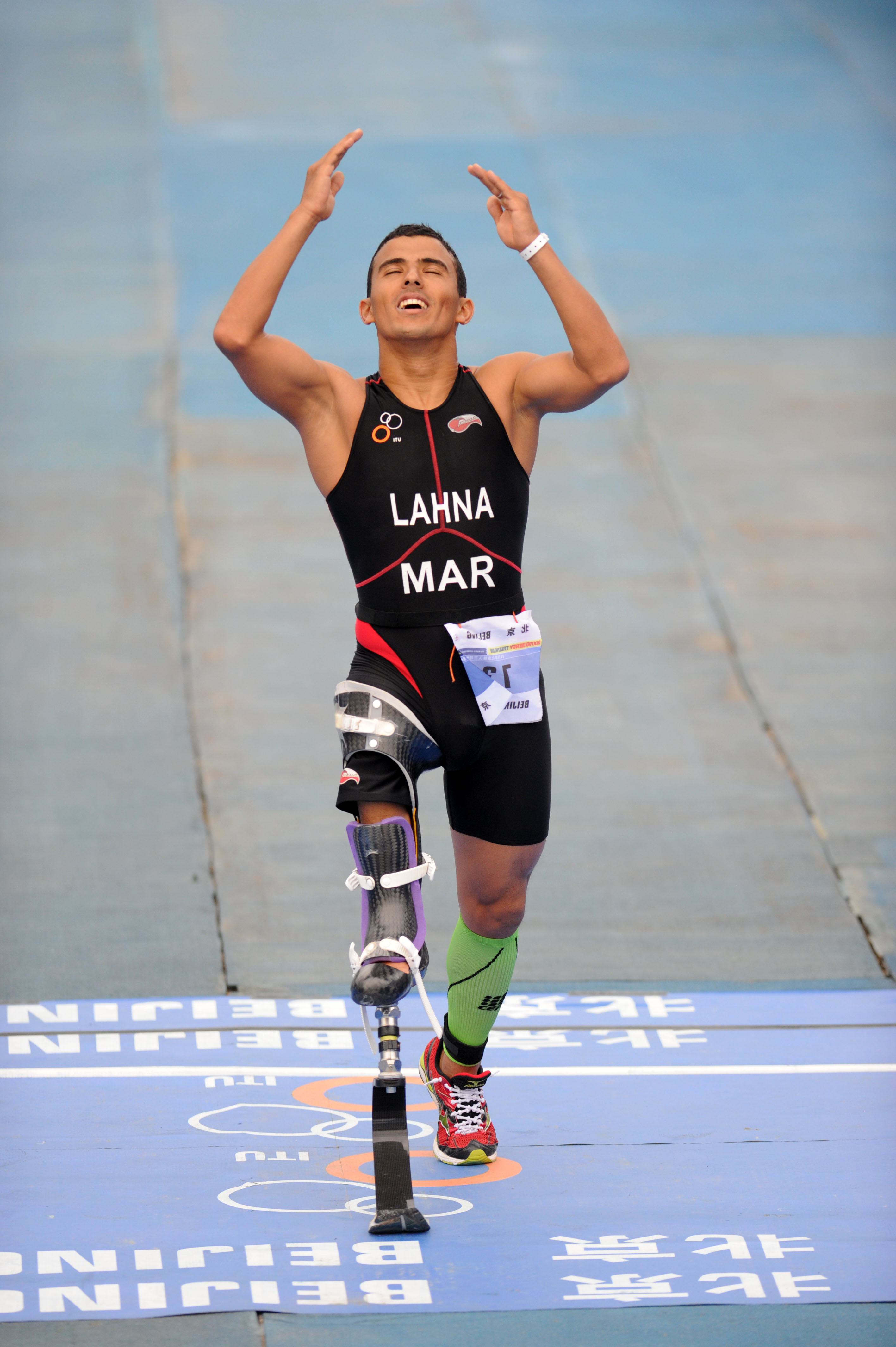 For many paratriathletes, overcoming obstacles and challenges was, and is to this day, an overwhelming reality. While physically the understanding of having to adjust when it comes to learning how to compete in sport comes early, other challenges are faced from outside the playing field. People tell you no, society says you shouldn’t and the “normal” advice is that you can’t.

But one triathlete who looks to make his premier Paralympic appearance is a man who took the word ‘no’ and used it as motivation to challenge his physical limits and become a revelation for a whole nation for the sport. That man is Morocco’s Mohamed Lahna.

“As a child, I never thought I could do much athletically since it was often hard to just keep up with my friends, but I still tried as best as I could. I was not allowed to participate in gym class at school, because of my disability. I was forced to just sit and watch on the sidelines. I guess you could say I am making up for lost time.”

Lahna was born without a right femur so as a child, he was told he would be limited with his physical activities. However, hearing the word “no” never really sat well with Lahna, so he challenged the idea that he couldn’t play sports. In doing so, he proved that not only could he play sports, he could excel in them beyond imagination.

“My motivation comes from different places, depending on the event I’m interested in doing, but for the most part, I love doing things just for the challenge, for the passion of the sport.” 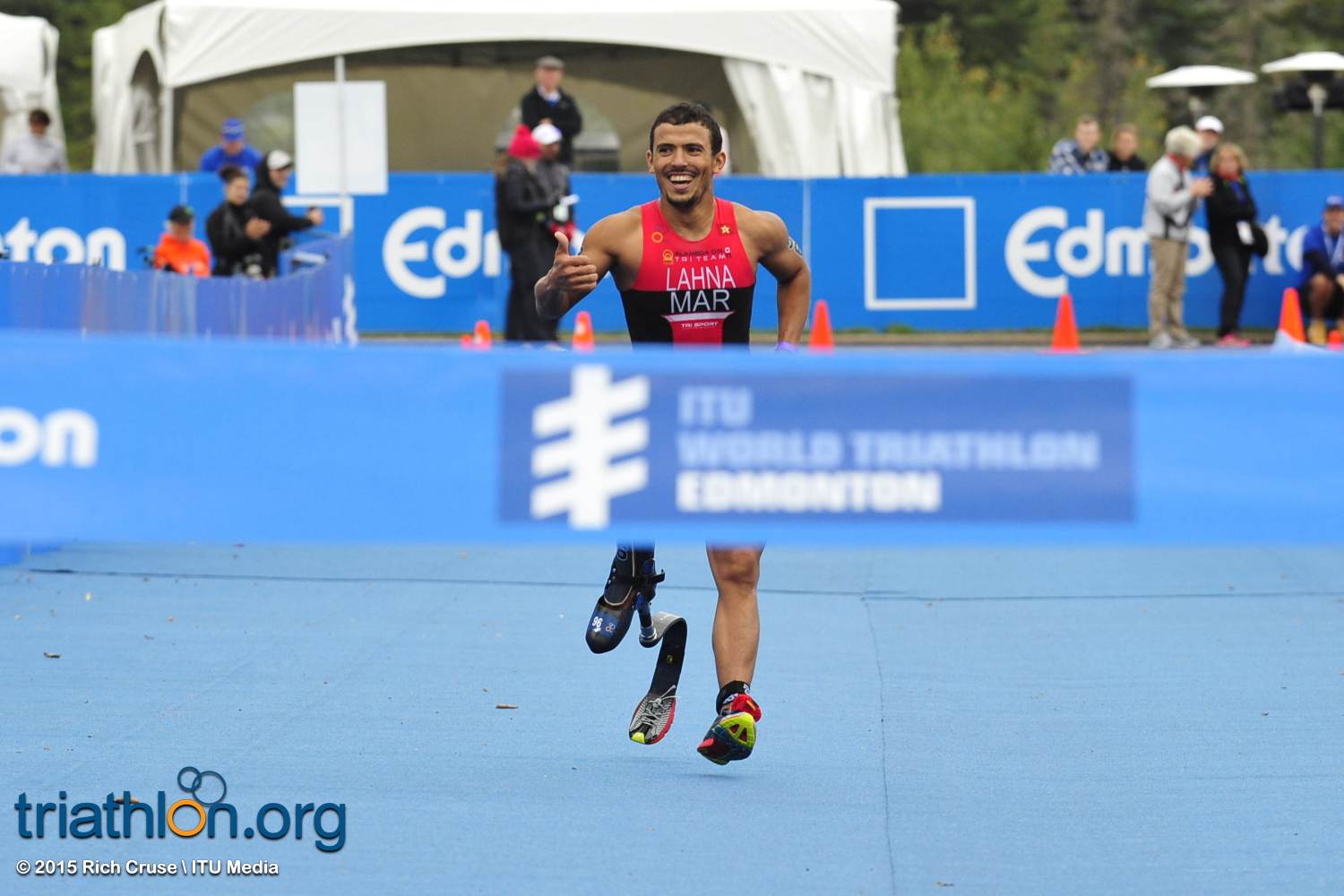 Lahna did not compete in his first triathlon until 2008. Instead he grew up playing sports and competing in various competitions. He played soccer when he was young, but then he later became active in all three of the components of a triathlon, just not at the same time. He started as a strong swimmer, having conquered the most impressive feat of swimming across the Strait of Gibraltar.

“I had heard of people swimming across the Gibraltar Strait and had seen on TV the annual Marathon des Sables where Moroccans often dominated. I never thought one day I would be able to do it myself, but dreams start somewhere, it’s just a matter of taking that first step towards them.”

He also started training as an avid runner and mountain biker. However, in 2008, his prosthetist suggested that he “tri” out a sport that combined all three of his passions into one. So before even collecting all of the equipment necessary to compete in his first race, he signed up to race in a triathlon—he just had to borrow his friend’s wetsuit for the swim and did the run portion with a pair of crutches.

For the first few years of his triathlon career, Lahna had to adapt into his racing style. He competed in the run portion while using a racing wheelchair because he did not think that he could run with the legs that he had. However, that all changed in 2011 when he was fitted for a running prosthesis and discovered that despite his doubts, he could run!

And the rest is all history.

Lahna started competing in the ITU paratriathlon circuit in the PT2 sport class as the first Moroccan disabled triathlete and the only in all of North Africa. He won his first ITU race in 2013 at the Edmonton ITU Paratriathlon International Event, a race he returned to and won just last year but as the new renamed Edmonton World Paratriathlon Event. 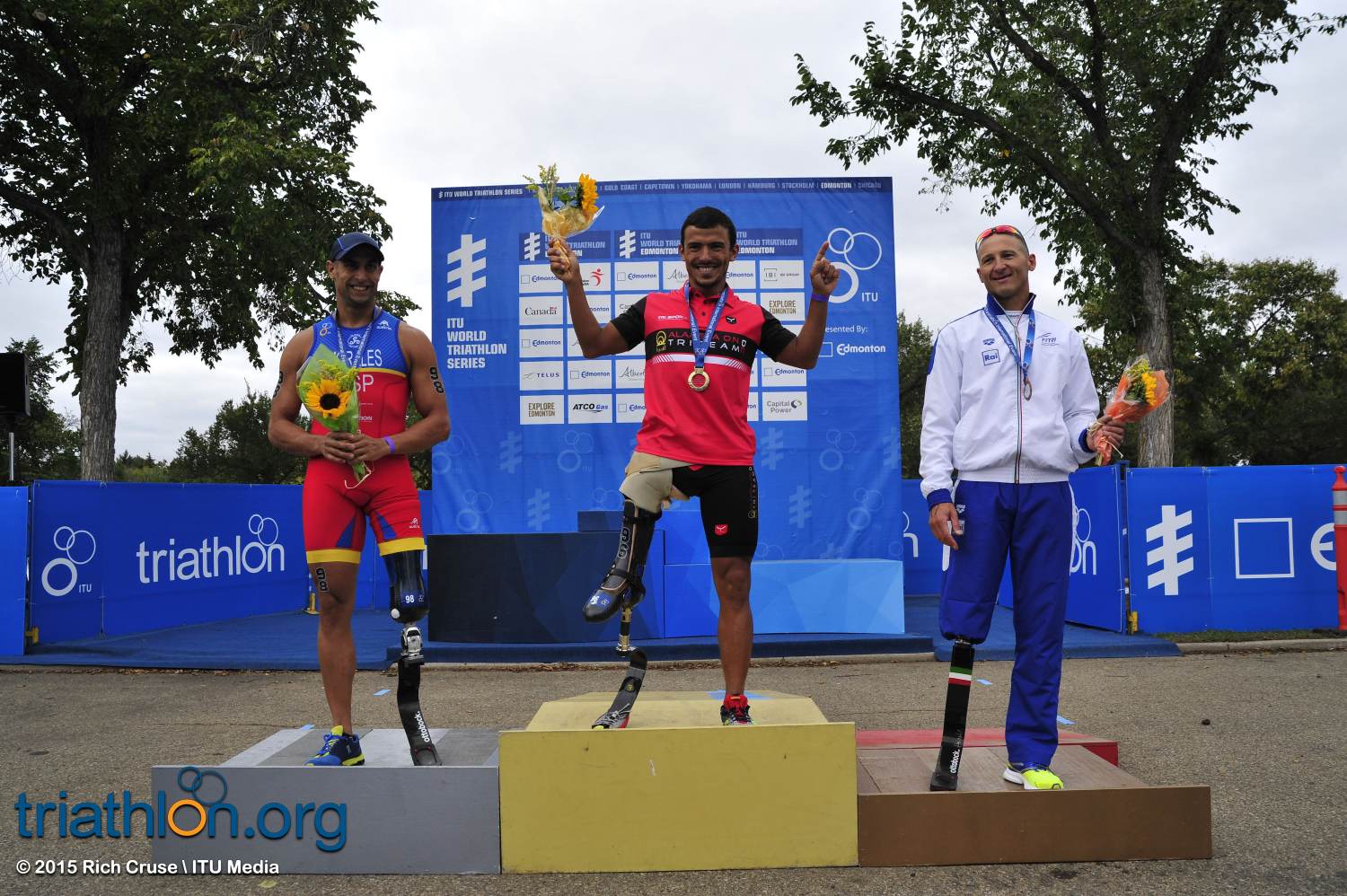 However, despite the years of competitions and racing, it is this year, 2016, that means the most. This is finally the year that his sport will make its debut on the world stage in the Rio de Janeiro Paralympic Games. And after winning the 2016 Bloemfontein ATU Paratriathlon African Championships in March, he has all but locked up his position on the roster of athletes who will be making the trip to Rio.

“I have been waiting for this moment for a very long time. It feels pretty good that I have my place for Rio early in the season, but the work isn’t over yet. The field is so strong and all the competitors are training harder than ever this year, so I just have to listen to my coach and “keep my head down” and train, train, train,” Lahna said on his earned spot for Rio this summer.

“As far as the Paralympics are concerned, this year is a special year since Triathlon will make its debut. I am so proud that I will get to represent my home country of Morocco for this occasion. Being an athlete with a physical challenge, doing a sport that is not hugely popular at the moment in Morocco, there is limited coverage and exposure, but I hope by my representation, I can help influence a growth, not only for the sport of triathlon, but for disabled sports in general for my country also the whole African continent.”

The recognition of the Paralympics continues to grow. With the 2014 Sochi Winter Paralympic Games being one of the most watched on television in Paralympics history, this summer is expected to match that success. People from all around the world are going to tune in and witness the strength and phenomenal ability that disabled athletes possess. And paratriathletes are no different.

“I am so proud to see how disabled sports have continued to push boundaries and show the world that we are strong, competitive athletes as well. More so, it will be an amazing feeling to represent my country of Morocco and the Arab region, in general, while hopefully demonstrating that people with physical disabilities do not necessarily have to limit their goals in life.”

Lahna gets the chance to be a part of history. But he also individually is creating his own personal history this year, by being the first Moroccan paratriathlete to compete in the Paralympics.

“Triathlon is still a very new sport in Morocco, although we have a small community growing little by little. Culturally, triathlon is not generally regarded as a sport commonly present in the Arab countries, such as Morocco, but its presence is increasing. Lately we are seeing the number of triathlon events growing in North Africa and the Middle East.”

This year, 2016, is an especially crucial year for all of the elite paratriathletes, as everyone is training to not only to go to Rio, but to do well in Rio. Lahna is a team member of the Alameda O.N. Triathlon Team, whose mission is to grow the sport of triathlon in the Arab nations. But it has also had a huge impact on his training and his career in the sport.

“I had heard about this club that was interested in supporting triathlon in the Arab world (North Africa and the Middle East) and reached out to Hassan Afifi, the team principal. He was so receptive to my story and took me on as an equal to his other elite triathletes. For me, this was groundbreaking. I am proud to be a part of this team and have been very excited to work with both the elite and development team. Alameda O.N. Triathlon Team has been a huge supporter as well as an important advocate for athletes in the Arab world to be more present in the world of triathlon. They are heading the ATU event in Sharm El Sheikh this coming April and hopefully will continue to grow.”

“For this year, I am risking it all and taking on training for the Paralympics full-time. Luckily, I have been supported by Alameda O.N. Tri team, a triathlon team that supports elite triathletes and helps to develop new triathletes at the grass root level in the Arab countries. I am also supported by OCP group in Morocco, a company that has been very supportive to national athletes, such as myself. Challenged Athletes Foundation has been another organization that has helped me over the years with grant funding for equipment and training/travel fees, encouraging people like myself to stay active. Ossur is a great prosthetic product company that has been outfitting me with my prosthetic components, helping me stay competitive.”

But funding and obstacles aside, the dream for Lahna is still coming true this September.

“This season is all about the Paralympics. I will be training and competing, hoping to improve as much as I can before Rio. When I started out with ITU events, in our field, there were just a handful of athletes. To see how our field has become so deep in just the last few years and to be able to participate in the first ever Paralympic Games for Paratriathlon having come from where we started is such an amazing feeling.”