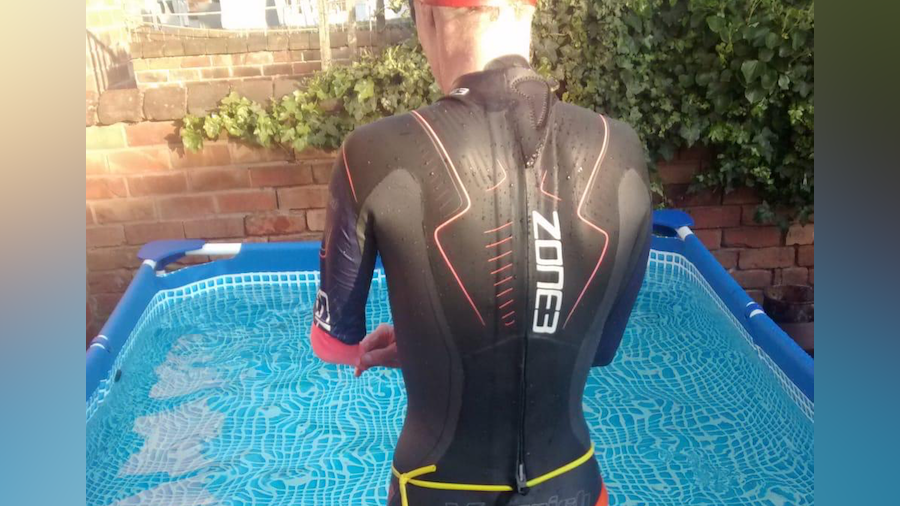 Lockdown life has been a very different experience from one person to the next. Cyclists have their turbos, runners have their treadmills, but swimmers need to either settle into life on dry land for a while or get creative. Great Britain’s reigning PTS5 World Champion Claire Cashmore chose the latter.

In the garden of a house in Loughborough, England, that she shares with her partner, the 2018 PTVI World Champion Dave Ellis, Claire now has a small pool and a bungee cord permanently and firmly anchored at one end and at the other, more often than not, around her or Dave’s waist.

“It is what it is, and for now that is definitely better than nothing. The set up won’t let us go all out, or at least I’m not really prepared to test that yet, but for the sensation of swimming and being in the water it’s really good.” 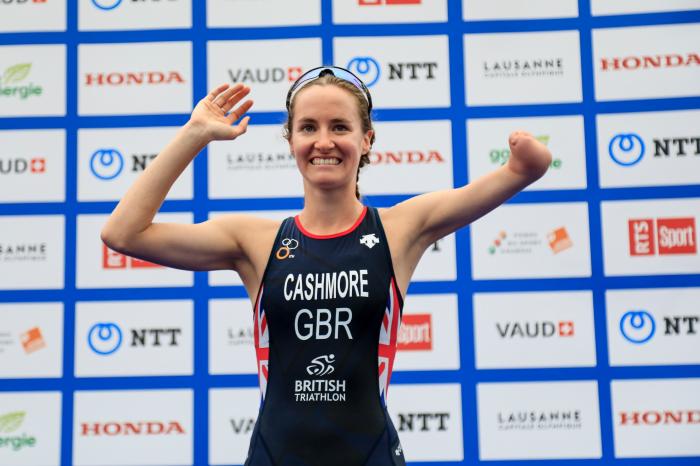 And so with the third element (more-or-less) covered, Cashmore has been able to return to her second home – the water. It was back at Athens 2004 that the then-16-year-old made her Paralympic swimming debut, earning backstroke and individual medley bronze. Three medals at London 2012 included a pair of silvers and, at Rio 2016, it was finally the gold in the 4x100 medley relay, cheered on by Ellis (who had missed the breaststroke silver after more than an hour in a Rio standstill despite running into the stadium).

“He went sight-seeing and got stuck in traffic on the way to the stadium!” she remembers with a laugh. But it had been a tough build-up to Rio for both. The men’s PTVI wasn’t chosen as part of the Paralympic programme as paratriathlon made its Games debut. Dave had also narrowly missed out on London 2012 selection as a swimmer. Now, with the IPC having announced the new dates for Tokyo 2020, both have been able to focus on next year safe in the knowledge that their categories will be on the programme.

“That’s just the life of an athlete,” says Cashmore, philosophically. “It’s an up and down road. That’s why Tokyo will be even more special for Dave because he’s been waiting for it for 12 years. Well, it will be 13 now! I find it really inspirational how he has stuck through it without funding or support for a lot of that time and just wanting to be the best he can be.”

For now, motivation appears to be the biggest hurdle for a lot of athletes as they await news of an end to the lockdown and the first events starting to appear back on the calendar. Cashmore is well aware that her own peaks and troughs have been more pronounced than usual. Sharing life with a fellow athlete has helped, though, and there have even been some unforeseen advantages to being able to be her own boss.

Luckily there have been no fights over turbo time. Ellis is a morning person, Cashmore likes a lie-in. Getting up and seeing him already going through his paces while she has breakfast is often just the spur that she needs.  “We’re so lucky to still be able to do two of our sports really well and it means I have this opportunity to focus on those two elements, so that’s a big positive. Even if I’m not feeling like it I try to hold myself accountable to get it done but you also have to be kind to yourself.”

“In some ways I’ve enjoyed adapting and changing the sessions, not having to fit within the usual squad timetable. The flexibility of being able to train when it suits, really mixing it up and taking ownership of what I’m doing allows me to learn about how I’m setting up my week and what works best.”

These are crucial parts of triathlete DNA, the adaptability that comes hand in hand with having to achieve excellence in three totally different disciplines. Outside of the sport, there have been plenty of opportunities to keep busy, too, and not dwell on the fact that the Milan World Championships that should have been, has passed along with countless other sporting events the world over.

“When I saw the Milan World Championships still in the diary, it really dawned on me how much time has stopped. It was like, ‘wow, I should be trying to retain my title’. It’s so bizarre and can make you feel uneasy if you think about it too much.”

Organising a 26-element day of activities to raise money for Reach, a UK charity for people with an upper limb deficiency, helped Cashmore connect with a lot of people around something positive. Spurred by the cancellation of the London Marathon and the subsequent huge gap in funding for hundreds of charities, as well as friends there was a certain Nikki Bartlett attempting to do one-armed cartwheels in their gardens.

As for the teammates she is used to training with almost every day, certain traditions have been maintained and helped give some important structure to each passing week. “We always have breakfast club on Thursdays and have a good catch up with everyone, so we’ve been maintaining that over Zoom. Breakfast on camera!”

Some of the past few weeks’ innovations may not be for the keeping, then, but for now, whatever keeps the mind occupied and healthy as well as the body is only to be embraced.

“As triathletes, everything we do racing and training is about being adaptable, it is something we’re used to. I’m not saying it’s easy, but I think slightly easier than other sports.”