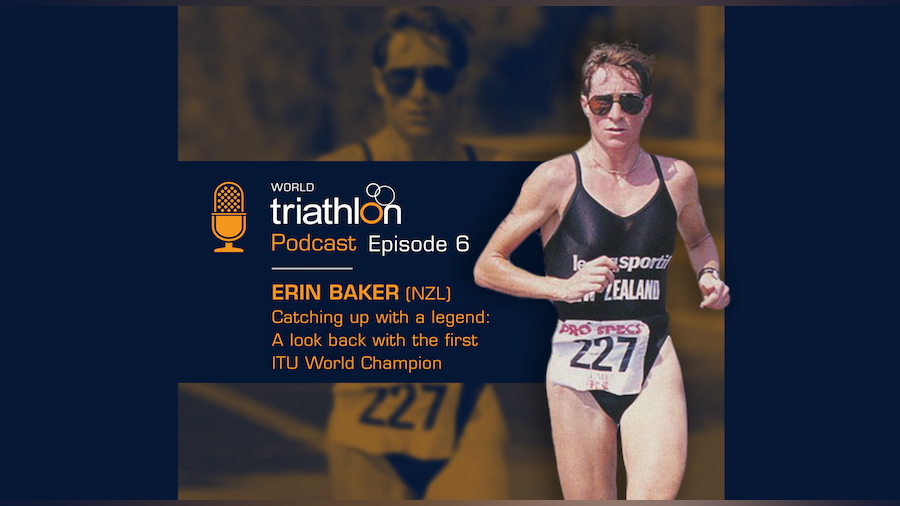 For this week’s World Triathlon podcast, we take a trip back to the early days of the sport, from New Zealand and Australia across to Nice and Hawaii via the first ever ITU World Championships in Avignon 30 years ago. Going into that race as favourite was Erin Baker, a New Zealander who, as the outspoken, principled and fiercely focused embodiment of triathlon’s early years, had already become one of the stars of the sport.

But as well as the fanfare surrounding the Avignon event, there was the pressure.

“It was pretty huge in many ways,” says Baker, “not just because it was the first official world championships, but because it was in France. Le Coq Sportif had supported me for five years, so there was an awful lot of pressure.”

The TriathlonLIVE footage of Baker taking the tape in Aviator shades and a steely glare reflects both her huge relief at winning, as well as her different approach to sport in general.

“It’s always been business for me. So my feeling was I’d done my job. Won for my sponsor, won for New Zealand and, ‘goodness me, it’s over!’ There was a US athlete, Jan Ripple, and I remember thinking what the hell was she still doing with me on the bike? And then she ran with me for a few km on that run and I thought ‘You’re not meant to be here with me!’”

Baker admits she owes a lot to the sponsors that helped turn racing into a viable career and who, possibly remarkably by her own admission, never turned their back on the non-conformist champion who rarely toed the establishment line.

“They say sport and politics don’t mix but the exact opposite was ingrained in me by my mother. I didn’t compete sometimes and the sponsors must have thought ‘what the hell is she doing’? I didn’t go to Nice one year because they weren’t giving equal prizes for men and women, so I probably didn’t even realise how easily the sponsor could have dropped me.”

It is a sentiment that feeds into Baker’s feelings around social media, something that she has no interest in but is well aware of how it has become central to today’s athletes building their profile, developing a sponsor-friendly brand and interacting with their fans. However, there is one thing she is pretty certain of when it comes to the likes of Twitter and Facebook - had it been around 30 years ago, that glittering career might have looked rather different.

“Because of my personality type, I would have got in so much trouble with the social media side of things. Everyone knows everything now. To have been critiqued more than I was, I don’t know how I would have coped with that. It’s all part of being an athlete now and it’s another department you have to deal with, and that probably could have been my swift ending.”

Listen to the full interview in Episode 6 of the World Triathlon podcast on Spotify, Apple and Google.