The 2012 ITU Triathlon Cancun World Cup might have been the end of the ITU world cup season, but it was a day of firsts in the women’s competition. Katie Hewison (GBR) added to her already successful duathlon season with her first win in an ITU World Cup when she pounded out an ultra-speedy run. Kaitlin Shiver (USA) also recorded her first World Cup podium when she crossed over in second, while Lisa Perterer (AUT) took her second bronze in an ITU race as an elite.

“I’m absolutely amazed,” said Hewison. “I’m really, really pleased. It was a great race for me. Just coming back to triathlon, I think I’m more suited for the sprint distance at the moment, so that was a really great race for me.”

Flora Duffy (BER) and Claudia Rivas (MEX) wasted no time getting themselves into prime position right from the start. Duffy came out with a blazing lead on the one-lap 750m swim, followed by Rivas. While the pair got a head start on the bike, a group of 16 athletes joined them on the first of three bike laps to form a large lead group. A small pack of six followed nearly a minute back on the 20km course.

The flat road proved ineffective for a breakaway, forcing the lead group, which included Rebecca Robisch (GER), Kathy Tremblay (CAN), and Elizabeth Bravo (ECU), Shiver, and Hewison, to tackle the course together.

While the group slowed significantly under the already-intense sun, they managed to maintain their distance from the chase pack on the second lap, which Shiver headed. Tremblay took her turn at the top when she bolted out to the front on the run course, followed by Shiver and Duffy. However, Hewison was too powerful and quickly overtook the leaders.

By the end of the first lap, she had gained an unbeatable advantage. Shiver and Tremblay followed Hewison, while Duffy fell behind in the tropical weather. Perterer prevailed under the equator temperatures, pulling even with Tremblay after the first of two run laps.

Much to her own disbelief, Hewison crossed over with a comfortable lead of 35 seconds in 1 hour, 19 seconds, emphatically jump-starting her return to triathlon from duathlon.

“I have been training (triathlons),” Hewison said. “This year was about building a base. I was out last year with a lot of injuries and had to come back slowly. I’m looking forward to next season now. It’s triathlon full steam ahead.”

Behind her, Shiver turned on the speed on the final metres to take silver in 1:00:54, while Perterer proved too tough for Tremblay, out sprinting the Canadian for bronze in 1:00:56.

“I feel very happy,” Perterer said. “It’s my last race this year. I think it’s a good finish. I like the heat. I have raced two times in Mexico, in Huatulco, and I like it. Now it is time for vacation.” 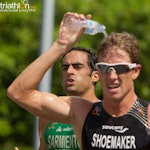 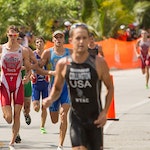 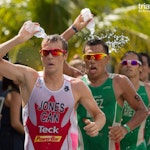 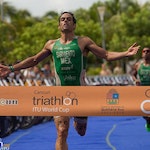 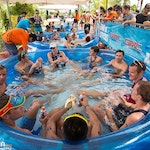 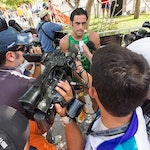 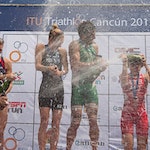 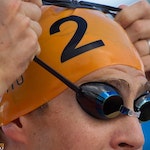 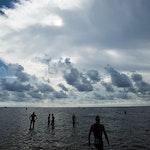 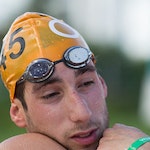 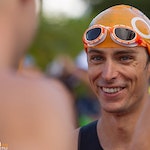 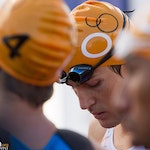