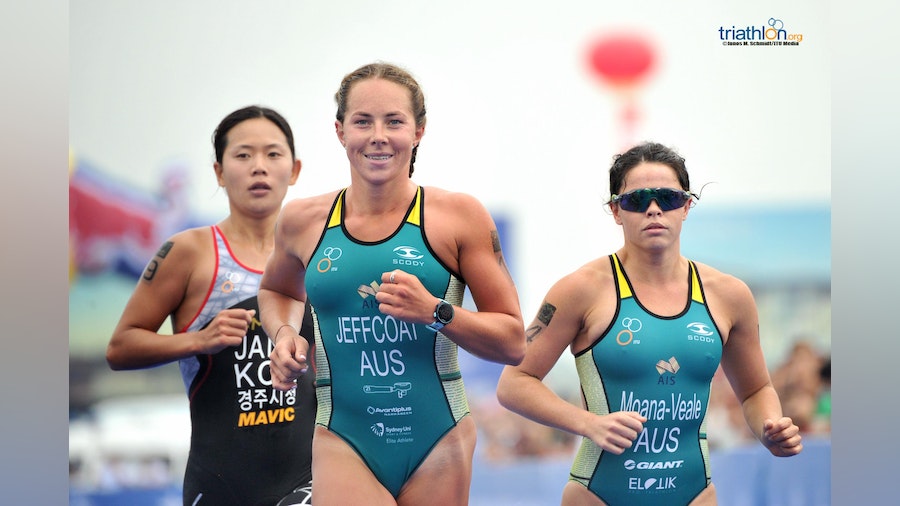 Heat 1
Hungary’s Bence Bicsak claimed top honours in round one of the men’s semi-final proving that he is perfectly suited to this style of sprint racing. Felix Duchampt, from France, crossed the line in second position and New Zealand’s Hayden Wilde took out third position.

America’s Seth Rider, Australia’s Marcel Walkington and Austria’s Alois Knabl led the men out onto the bike course but it wasn’t long before Bicsak, Duchampt and Wilde took charge. “It was a tough race. I felt a lot of power on the bike and really enjoyed it,” Bicsak said.

On the run it was Biscak who lay it down and set the pace. “I pushed hard on the run even though I know the final is tomorrow, I felt good. The tempo suits me,’ added Bicsak.

Heat 2
Mexico’s Rodrigo Gonzalez, arrived in Chengdu following a confidence boosting performance in Bermuda last weekend, displayed a strong finish to claim the victory in round two of the men’s semi-final today. Australia’s Brandon Copeland and Slovakia’s missile in the water, Richard Varga, took out second and third position respectively.

There were no surprises when Varga dominated the swim. Varga led the men out of the water and Seung Hun Seo from Korea and Mikhail Antipov from Russia trailed closely.

A chaotic chase out on the bike course, with the likes of Gonzalez playing catch up, saw a mass group of runners stride out on course together.

“My main objective wasn’t to win today, I just wanted to secure a good spot and starting position for tomorrow. At the end of the race, I was just feeling really good on the run. It’s a matter of resting and recovering well today and I will just do my best tomorrow. I need to see who has qualified to see whether there is someone I can break away on the bike with,” Gonzalez said.

Heat 3
America’s Morgan Pearson recently made the switch to triathlon and today’s performance, in round three of the men’s races in Chengdu, saw him maintain pace from the start and across all disciplines to claim line honours. With powerful displays Russia’s Igor Polyanskiy took out second place while Gabor Faldum crossed the line in third position.

In the swim, Morgan was among the top group of swimmers who came into transition with Gianluca Pozzatti (ITA), Polyanskiy, Faldum, Valentin Wernz (GER), Chi Zhang (CHN) and Gregory Barnaby (ITA).

The group stayed together out on the bike course but it was Pearson who stepped it up on the run, as expected coming from a strong running background. “My aim today was to make top 5 and I’ll be honest that run was really easy for me. I will recover well and look forward to tomorrow,” Morgan said.

The final three spots to make up the 30-man roster for the Final on Sunday were earned by Mikhail Antipod (RUS), Chen Liu (CHN) and Davide Ucellari (ITA) who finished over a minute ahead of the finallists from the second heat.

The remaining men who finished in the 32nd-61st position will compete tomorrow in the ‘B’ Final.

Heat one
Wearing number one for the initial round of the women’s semi-final was Australia’s Emma Jeffcoat who, in commanding style, crossed the finish line in first place. Hot on her heels was fellow Australian Tamsyn Moana-Veale followed by Yun-Jung Jang from Korea. The trio crossed the line together with a step separating them.

Jeffcoat comfortably led the women out of the swim and onto the bike course.The strong group of women rode together including Jeffcoat, Moana-Veale, Mengying Zhong (CHN) and Yurie Kato (JPN).

In the early stages of the run it was Jeffcoat, Moana-Veale and Jang who leapt ahead and sprinted the distance neck to neck. “My semi-final went exactly to plan. I really wanted to have a hard swim and bike to get away with a smaller group on the run and it went perfectly to plan. It’s straight into recovery now and it will be a different story tomorrow. It will be full gas and I will save everything I can,” said Jeffcoat.

Heat two
New Zealand’s Rebecca Spence went full steam in today’s second heat to come away with the win. Zsofia Kovacs from Hungary was second to cross the line with America’s Tamara Gorman finishing with a strong third place.

Spence’s strategy was to go hard from the start and she certainly achieved that by charging with the likes of Gorman in the swim and out on the bike. “I wanted to go really hard today because I am a big engine so the harder I go, I actually recover quicker. The goal tomorrow is to stay as close to Emma (Jeffcoat) in the water as possible, it will then be to smash the bike and the run,” Spence said.

“Today was about qualifying for tomorrow and getting mentally prepared and feeling out the course. It went well. I am excited to race the super sprint format tomorrow,” Gorman added.

2018 Chengdu ITU Triathlon World Cup finals will take place on Sunday, May 6, with the men starting at 9.35am (local time) and the women following directly after at 10.25am (local time).

Tune into the action with live timing at triathlon.org/live and on twitter @triathlonlive | #ChengduWC.