Sven Riederer (SUI) won bronze at the 2004 Athens Olympic Games and has podiumed in several World Triathlon Series, but he had never won a World Cup race until Sunday. Following a top 10 World Triathlon Series overall finish two weeks ago, the Swiss finally claimed the allusive World Cup win in Alicante in a tight finish against Spain’s own Vicente Hernandez and Great Britain’s Grant Sheldon.

“I am really happy. It is unbelievable to finish the season with a victory,” said Riederer, who claimed his sixth podium in a World Cup in ten years. Riederer obtained the triumph in the last running kilometre, fending off Hernández and Sheldon in a fantastic race.

“I knew I had to keep going with the pace,” said Sheldon, who won a bronze medal in the Junior World Championships two weeks ago in London. “As I am not used to running in the Olympic distance, I did not want to attack before the fifth kilometer and then I just wanted to see what could happen.”

In the Port of Alicante, Francesc Godoy (ESP), Igor Polyanskiy (RUS) and Alois Knabl (AUT) were the three first out of the 1.5km sans wetsuit swim.

Although most of the cycling segment had a huge pack at the front, with more than 50 athletes riding together, Conor Murphy (IRL), Pieter Heemeryck (BEL) and Wikus Weber (RSA) reached the second transition with a 30-second gap over the rest. But when the remaining athletes hit the pavement, the trio were quickly left behind.

While only the elder of the Polyanskiy brothers was the only one in the group who had ever won a World Cup race before Sunday, it was Riederer who sprinted ahead. The remaining followed suit, but the Swiss was too great to overtake, scoring his first World Cup win in 1:53:44. Hernandez hung tight for second two seconds later, while Sheldon crossed over another two seconds after him for bronze. Polyanskiy edged out Arraiolos for fourth in 1:54:07.

“Yes, everything was decided in the final 10,000 metres,” said Hernandez after claiming his first podium in a World Cup. “I was strong and I had to resist going too early. Polyanskiy lost contact and then I knew I had possibilities.”

“The season was OK for me, but finishing like this is perfect,” concluded Riederer. 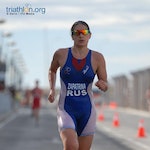 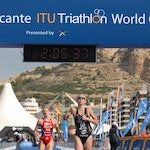 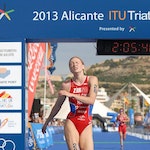 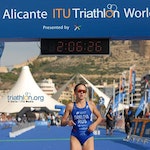 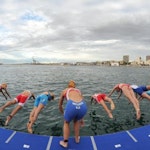 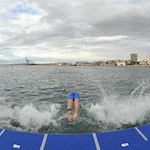 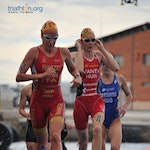 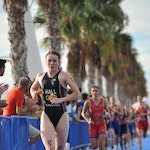 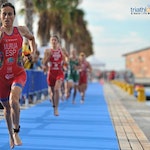 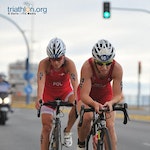 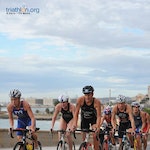 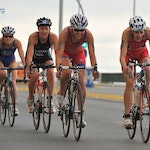