Paratriathletes brillant in Duathlon at the Sarasota World Cup

by Chelsea White on 14 Oct, 2018 06:20 • Español
In the seventh ITU Paratriathlon World Cup of the season, elites lined up in Sarasota-Bradenton to race a sprint-distance Duathlon course after water conditions changed the format from the original triathlon course.

In the seventh ITU Paratriathlon World Cup of the season, elites lined up in Sarasota-Bradenton to race a sprint-distance Duathlon course after water conditions changed the format from the original triathlon course.

PTWC
The PTWC sport class began the day as the first wave of athletes to take on the Sarasota Duathlon course, which included seven men and five women in the field. First doing one-lap of 2.5km on the run before making it into the first transition to change into bike mode, Aussie Nic Beveridge and Fernando Aranha (BRA) earned the early lead on the men’s side.

That lead held up and Beveridge maintained his leader status through the bike and onto the final longer 5-kilometre lap in the second run leg. He finished as the first Paratriathlon Sarasota Champion of the day. Coming in second was Aranha, while bronze went to Jan Tomanek (CZE), who had the fastest bike split time of the race.

On the women’s side, Jessica Ferreira (BRA) won her first World Cup race from her blistering bike speed out on the course. Second went to Kendal Gretsch (USA) and third to Brenda Osnaya Alvarez (MEX).

PTS5
Only the men raced in the PTS5 class and it was Mexican Juan Carlos Cano Espinoza who led from start to finish with the fastest split times in his category. He took gold, with Antoine Besse (FRA) coming in second and Keiichi Sato (JPN) finishing off the podium in third.

PTS4
The PTS4 sport category had as the largest class of the day with three women and 11 men racing. On the women’s side however, only two of the women finished as Kelly Elmlinger (USA) claimed victory and Kelly Worrell coming in second.

In the men’s race, Ireland’s Andrew Nicholson was down after the first run leg, but then made up for it in the bike to become the new leader. He then would carry that lead right into the finish line to win. The silver was given to Jiachao Wang (CHN) and bronze to Brice Marmonnier (FRA).

PTS2
Another male only event was the PTS2 class in Sarasota. With five men on the roster, it was the Americans vs the Colombians. USA’s Adam Popp showed his strength in the run to grab the gold, despite having one of the slowest bike splits. While Alberto Almeida Arciniegas (COL) finished second and Cahin Perez collecting third.

PTVI
The visually impaired athletes were the largest category in the field of the day, with strong contenders in the mix such as South Africa’s David Jones who was guided by ITU Triathlon World Champion Conrad Stoltz.

In the men’s race, Yuichi Takahashi of Japan claimed gold and his first World Cup win. Second place went to Kyle Coon of USA and then the bronze was from Japanese compatriot Satoru Yoneoka.

On the women’s side, while the field was much smaller, it was an American sweep as Elizabeth Baker won the title, with Amy Dixon coming in second and Eliza Cooper in third. 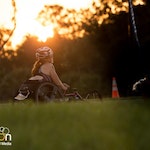 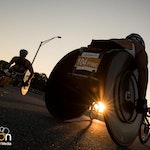 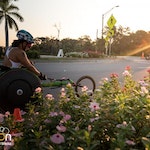 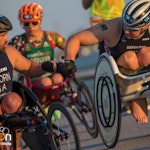 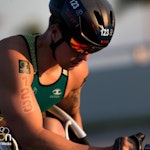 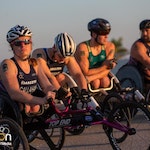 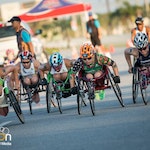 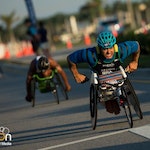 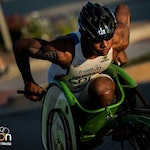 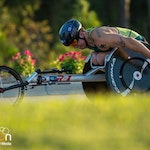 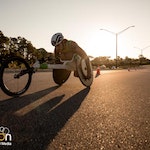 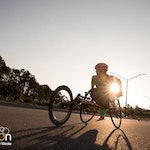