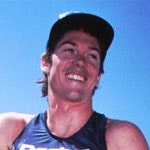 North Queensland schoolboy sports star Brad Beven (AUS) would run four kilometres to and from his beloved Miriwinni State School every day carrying a brick in each hand. The kids on the school bus would hang out the window and give him a hard time, laughing at the boy running along the road as they enjoyed their daily ride to class. But this 10-year-old farm boy who would one day conquer the world, took the Miriwinni school motto of “Success Follows Effort” literally.

“The kids would give me a hard time, yelling at me from out of the bus windows,” said Beven. “They later told me that they’d never realised just how good I would become.”

Now there is a sign that welcomes travelers to Miriwinni (a little sub-tropical haven some 65 kilometres south of Cairns) “The Home of World Triathlon Champion Brad Beven.”

Beven went on to become a legend in the sport. He won 17 World Cup races in his career, the most in ITU history, and earned four consecutive overall World Cup Series titles between 1992 and 1995. He also collected three silver medals in the ITU World Championships in the 90s – amongst a host of amazing achievements at home and abroad.

Nicknamed “Croc” because he would train through crocodile infested swamps around his parents cane farm in Miriwinni, Beven along with the likes of Greg Welch and Miles Stewart, would go on to transform the sport of triathlon for their nation, putting it on the Australian sporting map.

Above all of his international wins and notoriety, Beven believed it was his victory in his home town, the Cairns Triathlon in the late 80s, that stands out amongst an extraordinary career that saw him race consistently 30 times a year for four years to win the World Cup Series for four straight years (1992-1995).
Many believe that Brad Beven was the world’s greatest triathlete “never to win a world championship.”