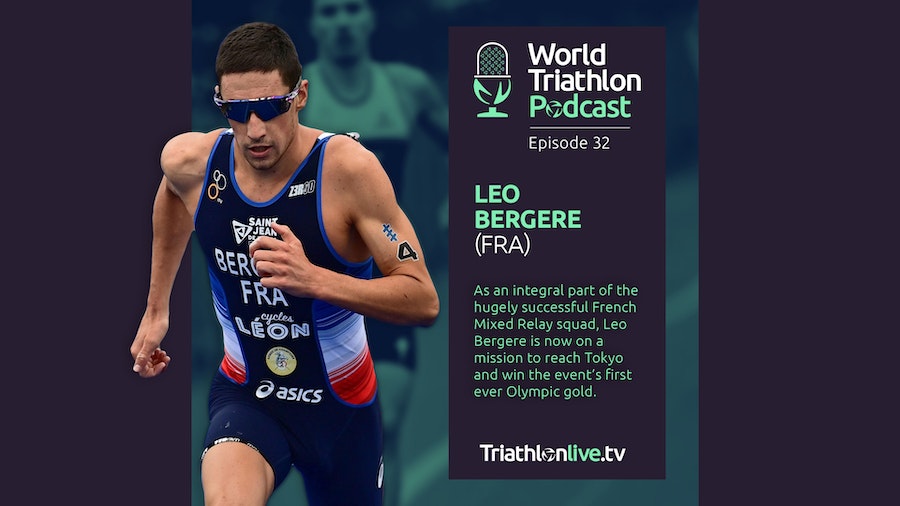 Episode 32 of the World Triathlon Podcast sees Leo Bergere, one of the youngest of a strong current crop of elite triathletes out of France, talk about how he is looking forward to the battle for Olympic berths between the talented French set up, why the Grand Prix circuit has powered the current national success and how learning to take risks has improved his racing. Listen on Apple, Google and Spotify.

“As a pro triathlete, we like to know where we are going and that wasn’t the case last year,” he says, despite securing World Championship bronze in Hamburg in September. “That was a turning point because I could finally get a spot on the podium after missing out a few times. That was more a mental game I think, because I wasn’t taking enough risks.”

“I think in my first years in the French team I was afraid to lose my spot, so I was just calculating too much. I finished quite a few races with the feeling that I had missed something and I waited too much on the bike or I was staying behind some big names on the run. Now I’m starting to have a little bit more confidence.”

“I needed to pass through these different steps and it’s true that this level right now in France is making everyone strong in the team. We are lucky to have this level and some figures like Vincent… I’m learning a lot.”

“The Grand Prix circuit sees the best in the world come and race for five events in a season so, as the best junior in France, you get to race alongside a Gomez or Brownlee with no pressure, just learning as much as you can and going for it. That’s some hard racing and really good preparation for the WTCS.”

As for the French team’s chances in the Mixed Relay at the Olympic Games in August, Bergere knows that even the string of world titles means nothing when they hit that start line in Tokyo.

“We are always careful… it’s a spot where you have to enjoy being because the next race you can get beaten because all the other teams are so, so strong as well. We are not the only favourites. We are mixing it up a little bit to try some new strategies.”

You can listen to the full podcast below, where Leo talks about how living with Italy’s Angelica Olmo has instilled certain good nutritional habits that have helped him finish Olympic distance races stronger and the tiny blue car they travel around in when not flying to races around the world, as well as revealing the pains of running barefoot in Singapore.