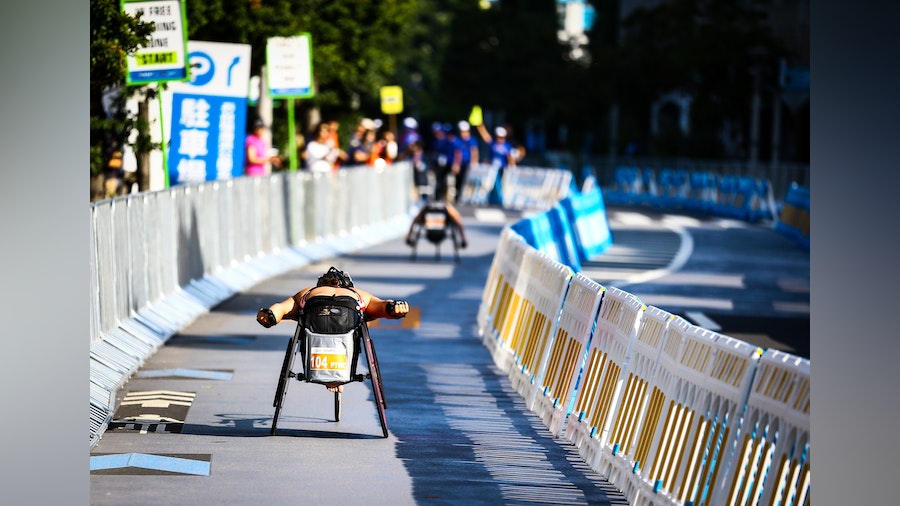 After an exciting Paralympic debut at Rio 2016, Para Triathlon will take centre stage, across Saturday 28 and Sunday 29 August, at Tokyo 2020. With Para Triathlon having four medal events for each gender on the Tokyo 2020 schedule, the men and women PTWC and PTVI athletes will compete along with the PTS2 and PTS5 women and PTS4 and PTS5 men.

The schedule
On Saturday the Para Triathlon competition starts at from 06:30am (JST) and will include Men’s PTS4, Women’s PTS2, Men’s PTVI and Women’s PTVI races. On Sunday the stars of PTWC men’s and women’s fields will take to the Paralympic stage from 06.30am (JST) followed by the PTS5 men and women.

The venue
Odaiba Marine Park will be the venue for all Para Triathlon events. The small island in Tokyo Bay lies to the south of the metropolitan centre, between Koto City and Shinagawa City, with incredible views back to the city across Rainbow Bridge.

The course
The swim will consist of a single 750m lap of the Bay, followed by four 5km laps of a flat and technical bike course towards Ariake Tennis Park then heading north over Fujimi Bridge and doubling back towards Odaiba. The final run segment will see four laps of 1.25km, finishing in front of the grandstands on Odaiba Beach

The men’s PTS4 race field is highly competitive event at the Tokyo 2020 Paralympic Games. Over the past four years Frenchman Alexis Hanquinquant leads in as a top contender, as he dominates over all segments. In principle there are four other medal contenders to mention including Jiachao Wang (CHN), Hideki Uda (JPN), Alejandro Sanchez (ESP) and Michael Taylor (GBR). Jorge Fonseca (BRA) and Antonio Franko (CRO) are para athletes on the rise and ones to watch, with their recent performances. Fonseca secured bronze medals at the 2021 World Triathlon Para Cup A Coruna and at the Americas Triathlon Para Championships Pleasant Prairie. Mikhail Kolmakov (RPC) could also prove a threat to the field. Team USA has two qualified para athletes in this class including Jamie Brown, who brings a wealth of race experience with him to the Games and debutant Eric McElveny.

In the women’s PTS2 field all eyes will be on Rio 2016 Paralympic champion Allysa Seely (USA) to defend the title. Seely has been dominating the event for several years. Recently we have seen Great Britain’s Fran Brown and USA’s Hailey Danz moving through this class so it will come down to who can produce the best performance in the arduous Tokyo conditions. Brown is recovering from a partial bowel removal that has left her with hydration and nutrition issues, from which she has not fully recovered. Italy’s Veronica Yoko Plebani is a para athlete on the the rise and will surely chasing a medal. Melissa Stockwell (USA) is always strong competitor and Japan’s Yukako Hata will be looking to rely om her swim skills to ensure she keeps within the higher position in the final rankings. Veronika Gabitova (RPC), will make her debut at Tokyo 2020.

The men’s PTVI will make its debut at these Paralympic Games as the newest medal event. The battle is going to be fierce as the field is stacked with world class talent. Hector Catala (ESP) and Dave Ellis (GBR) are among the favourites to medal in this event. Kyle Coon (USA) and fellow compatriot Brad Snyder, Antoine Perel, Thibaut Rigaudeau (FRA) and Jose García from Spain cannot be discarded at all. Although we haven’t seen the Australian para triathletes race much over the past year, due to the pandemic, Jonathan Goerlach from Australia has arrived in incredible form.

Rio 2016 saw one of the most incredible finishes in Para Triathlon in the women’s PTVI category with Katie Kelly securing a dream gold with her guide Sydney 2000 Olympic triathlon silver medallist Michellie Jones. Kelly returns to the Paralympic stage in Tokyo with Rio 2016 silver medallist Alison Peasgood (GBR), both lining up to defend their medal performances. Spain’s Susana Rodríguez has produced extraordinary results since 2019, when she won World Para Triathlon gold in Yokohama and has been on a winning streak ever since. Jessica Tuomela (CAN) shown tremendous progress in the last couple of years and will make her Paralympic debut, in Para Triathlon, this weekend. Amy Dixon brings a wealth of experience to the field as a multiple gold medallist on the world stage and two-time National champion. Italy’s Anna Barbaro, Annouck Curzillat (FRA), Elizabeth Baker (USA) and Vita Oleksiuk will be looking to make an impact on the field.

The PTWC men will take to the stage first on Sunday (0630am JST) and Paralympic champion Jetze Plat (NED) is the man to beat. Plat returns to defend his title and is the indisputable favourite headlining Sunday’s medal event. Compatriot Geert Schipper (NED) will be ready to put down a fight, having Italy’s Giovanni Achenza also on the start list, both men have shared podiums over the years since Rio. Florian Brungraber (AUT) has results to show that he’s up there with the world’s best to be marked as a medal prospect, together with the two French athletes, Ahmed Andaloussi and Alexandre Paviza. This field could produce surprise performances with the likes of Australia’s Nic Beveridge coming in with incredible form, despite not having raced internationally in over a year. Japan’s Jumpei Kimura (JPN) and Pier Alberto Buccoliero (ITA) also among the men to watch and Tunisia’s Fathi Zwoukhi (TUN) known for his explosive power on the race course.

In the women’s PTWC event you can’t look beyond Australia’s Lauren Parker (AUS) and Kendall Gretsch from the USA. Emily Tapp (AUS), although not having been competing since Devonport 2020, was a regular podium athlete. Spain’s Eva Moral, Jessica Ferreira (BRA) and Margret Ijdema (NED) have also contested for the podium at many races and prove threats to the top women in this field. Mona Francis (FRA), Rita Cuccuru (ITA), Wakako Tsuchida (JPN) and Brenda Osnaya (MEX) will be looking to be in the mix for medal contention during Sunday’s showdown.

Stefan Daniel (CAN) will headline the elite men’s PTS5 and has assured his status as gold medal favourite, with victories in this event since 2017 despite one silver medal performance. However Paralympic champion Martin Schulz (GER) will be looking to snare the win for this one and is looking to defend his title. The men’s field is highly competitive with the likes of Spain’s Jairo López, Great Britian’s George Peasgood (GBR) and run specialists Carlos Viana (BRA) and Chris Hammer (USA). Ronan Cordeiro (BRA), David Bryant (AUS), Guenther Matzinger (AUT) and the veteran Yannick Bourseaux (FRA) could also be aiming for the top of the podium if they’re having a good day in Tokyo.

Paralympic and World Para Triathlon champion Grace Norman returns, in the women’s PTS5 event, to defend the title however she will be up against tough competition again with the dynamic duo and both world champions from Great Britain, Lauren Steadman (Rio 2016 silver medallist) and Claire Cashmore. The three women race each other on the Para Triathlon circuit regularly. Steadman and Cashmore have been sharing podiums on the Para Triathlon circuit since 2019, although Lauren seems to have a slight advantage in the last few head-to-head confrontations. Kamylle Frenette (CAN), Gwladys Lemoussu (FRA) and Ukraine’s Alisa Kolpakchy will be up against each other as medal prospects. Japan’s Mami Tani will be looking to produce a podium performance at a home Paralympic Games and 2019 world champion Kelly Elmlinger of the USA will also be one to keep in range, come Sunday at Odaiba Marine Park.

How to watch
The Tokyo 2020 Paralympic Games action is available to watch throughout the world all
thanks to IPC’s official broadcast partners. Subject to geo-block restrictions, the IPC will live-stream 19 sports -including all Para triathlon races on Paralympic.org and the Paralympics LIVE app, via the OBS’s Paralympic Video Player, where visitors can choose between up to 16 parallel live streams covering streamed sports.