More than 500 women from the Americas participate on the PATCO webinars: Empowering women in sport 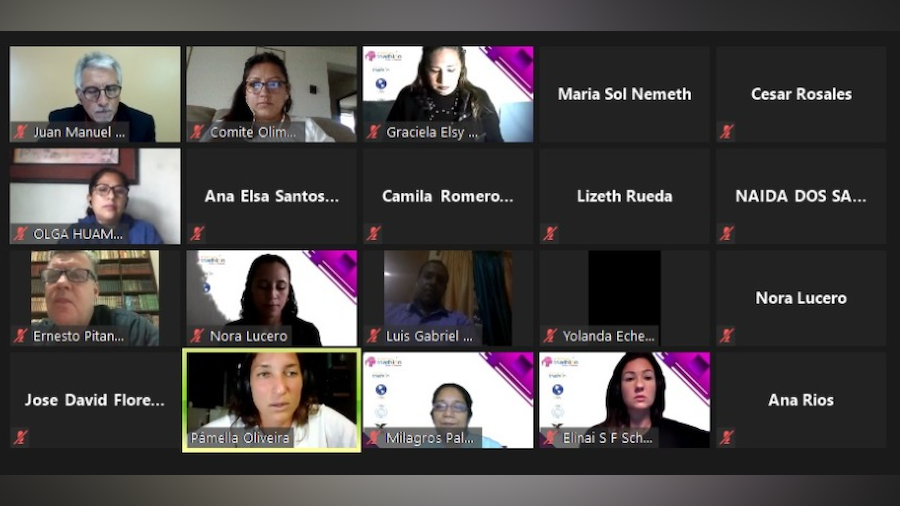 More than 500 women from all over the American continent have participated in the three editions of the series of webinars, organised by Triathlon America, on empowering women in sport. The webinars, in Spanish but with live translation to English, were focused on athletes, officials, managers and coaches, giving them resources to expand their careers.

First webinar
Gabriela Jurado, president of Women and Sports for PATCO and organizer of these webinars, indicated that in PATCO gender equality was always present. In the board of directors, 45% of its members are women and the participation of female athletes, coaches and technical officials has been promoted heavily in the last years in an environment of equity.

Marco Arze said that, of 9 directors in the Bolivian Olympic Committee, there is only 1 woman and that much remains to be done. But they are advancing, since, of 37 regional Federations in their country, 7 have women in charge. It is necessary to modify the statutes to achieve greater equality.

Marisol Casado, World Triathlon President, said that she was delighted to participate in this series of webinars. “Women need to access top leadership, but it is difficult to reconcile volunteer work with free time”, she said. Likewise, she expressed that academic training is very important for women to feel safe in the workplace because they have to be prepared for the functions they are going to perform. She added that it takes passion at work to reach a privileged place.

On the other hand, Never ilic Álvarez stressed that women have to reach the top because they have the ability to do so. In addition, she said that it is necessary to supplement quotas for women within PANAM SPORTS organizations. Shee concluded by assuring that it would do the sport very good to have more women because in addition to their ability, “they are extraordinary”.

Nelly Becerra, secretary general of the Mexican Triathlon Federation and a member of the World Triathlon Women and Sport Committee, emphasized that “we live in a man’s world and if women do not have knowledge they are at a disadvantage”. In turn, she indicated that it is important to have a mentoring program like the one World Triathlon is putting in place, to give more women more opportunities to have a career in the sport.

Second webinar
Juan Antonio Belmar, host of the event, welcomed the new Conversation. President, Graciela Jurado, highlighted the great work carried out by all its members.

Regarding the speakers, he highlighted the contribution that Claudia Beristain, ITU facilitator, has made in her long career in triathlon. He also mentioned Nora Lucero, ITU level 1 coach, and her long road ahead to continue contributing to the sport. In turn, she said that it was a pleasure to have Yanci Ugalde Almengor, ITU level 2 coach, among the speakers. She is from Costa Rica, whose Federation is chaired by a beloved woman like María Cristina González, who in the last hours became a member of the National Olympic Committee Olympic in her country. Finally, Líber mentioned the contribution that Elinai dos Santos Freitas Schutz, member of the PATCO Women’s and Sports Commission, made to triathlon in recent times.

The Level 2 Technical Officer recounted her work experience at the Lima 2019 Pan American Games. She recalled that at the Toronto 2015 Pan American Games, she wanted to learn the most, despite the language barrier, so that her country would have information. She collected data, including photos and interviews with other technical officers, to find out what she had to do in Lima 4 years later. The result was a success: Peru provided a human warmth that made visitors feel at home. There was a sports party.

Then it was the turn of Bobbie Solomon from the United States. She is also an Official Level 2. She began by recounting her beginnings in triathlon and remarked that she felt part of the sports family from the first moment. “If you like triathlon and understand what it is about, you should work in races in different countries” she recommended.

The third participant of the night was Ivette Bourette from Panama. Like her predecessors, she is a Level 2 Technical Officer. She began by talking about the characteristics that technical officers should have. First of all, you have to be organized, have great communication, empathy, patience, passion and be multifaceted.

The last participant managed to move everyone present. It was the testimony of Naida Dos Santos Freitas, 70 years old. Originally from Brazil, she is a Level 2 Technical Officer and since 1988 has officiated in Triathlon events. She always stood out in all the sports she practised, but she defined herself as versatile “I was never the best athlete, but I always kept working hard,” she said in reference to the different activities she developed. She stressed that, at her age, she still competes and feels active. The passion for triathlon is what makes those who practice it different.

For the fourth edition of the webinars, athletes Camila Romero Taveras from the Dominican Republic; Abigail Garzo from Guatemala; Pamela Oliveira from Brazil and Lizeth Rueda from Mexico expressed their career paths in the sport, and shared with a great audience of more than 300 persons (200 of them from the Continent) the importance of the fight against harassment and abuse in sport.
Focus was also set on the fact that having girls and young women involved in sport from a young age will bring a better quality of life for their future and healthier habits. The athletes also explained how hard has it been to train for triathlon during the pandemic, how they had to change their mindsets to adapt to new goals and how they see the future of triathlon in the next years.