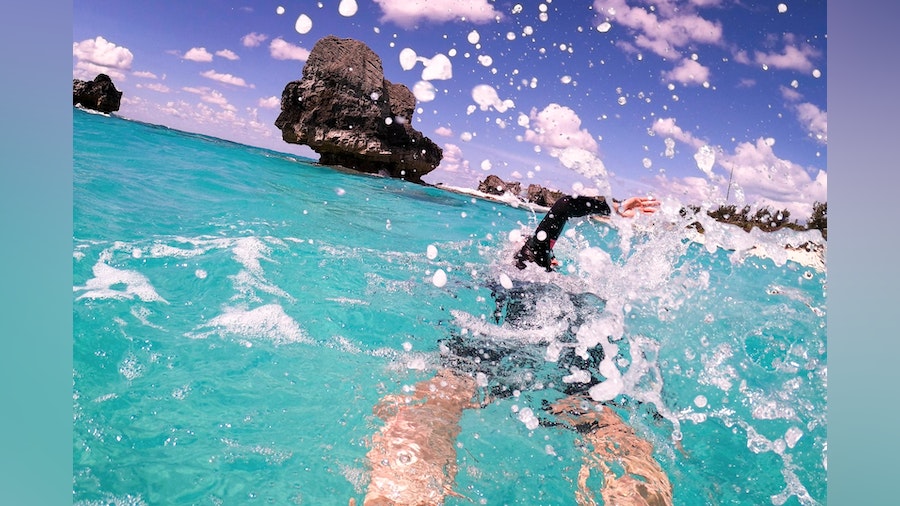 The World Triathlon Series will stop for the first time in history in Bermuda this weekend. The top triathletes of the world will be heading to the double World Champion Flora Duffy home nation to enjoy the pink sand beaches and crystal clear waters of the Atlantic Ocean and suffer the dramatic Corkscrew Hill. Everything is ready in the tiny island for the second stop of the Series.

And it will be indeed a great experience for the local crowds favourite, Duffy, the defending World Champion and recent Commonwealth Games gold medallist, who arrives home as the one to watch in a course that can be considered her backyard.

The 32 elite female triathletes competing in the first ever WTS Bermuda will face a 1500m swim the calm and transparent waters of Hamilton’s Harbour to then get ready for what is most likely to be the most brutal bike ride of the season: 10 brutal trips up the infamous “Corkscrew Hill” followed by a technical descent, nice technical turns and corners with the magic background of the picturesque buildings of the islands.

After 40km on their bikes, and with Corckrscrew hill being the deciding factor, the athletes will head to the final 10km fast and furious run through downtown Hamilton, on Front Street, which will guarantee to have thousands of spectators. They will indeed cheer the athletes until they cross the finish line in the Stadium, all covered in blue carpet.

With Flora toeing the start line, it is most likely that most of the 65,000 people who call themselves Bermudians will, in fact, be ready to cheer for her this Saturday. Even though the course looks like a perfect fit for probably the strongest rider of the pack, she will have some fierce competitors trying to call themselves the first ever winners of WTS Bermuda.

“It is a dream come true to have a WTS race in Bermuda, and I can’t wait to get to the start line”, said the proud Bermudian, who has been focussed not only on training in the last few days, but also on giving advises to all triathletes coming to her home place on how to enjoy the island for a few days.

Strangely for her, Flora won’t be wearing the golden number 1 bib here, as she crashed in the first WTS of the season in Abu Dhabi, but will give it all to leave Bermuda with the winner trophy.

That number golden number 1 swim cap will be this time for Rachel Klamer, who earned her first-ever WTS victory in Abu Dhabi, and who is more than willing to prove that that was not by chance. Over the Olympic distance, the Dutch will be able to show her bike skills and her improved run that put her as one of the ones to watch in Bermuda.

Excitement is probably the feeling most of the athletes have with the challenging and impressive course around Hamilton, proving that new cities are always welcomed by triathletes. “I"m super excited to be racing at a new venue and a place I’ve never been that looks gorgeous. It’s made even more meaningful because my family will be there watching, plus my dad, my husband Tommy, and my uncle will all be racing in the morning before the elite races”, explained Katie Zaferes (USA), herself one of the favourites to be in the top group. The tough bike course will be indeed the perfect scenario for the American to try to push for a breakaway.

She will have to look out for her teammate, Kirsten Kasper, who had a splendid beginning of the season, with a fourth place in WTS Abu Dhabi, a gold medal in New Plymouth World Cup and a silver in Mooloolaba World Cup.

Some other athletes that will have a “favourite” tag on their shoulders will be Canadian Joanna Brown, who trains with Kasper, and the rest of the American squad, Chelsea Burns, Summer Cook, Taylor Spivey and Taylor Knibb.

For one of the British stars, Vicky Holland, the race is one of the most interesting of the season. “Bermuda will be my first Olympic distance race for nearly a year, and what a great place to be doing it! I’m pleased with how the season has started. Obviously fourth at Commonwealth Games was a hard position to finish in, but the Mixed Relay silver medal was a big bonus. I’m looking forward to getting into the Series now and hoping I can put together a good set of results,” she said.

Vicky’s return to competition after nine months couldn’t have been any better, winning gold at the Cape Town World Cup, but she finished 11th in WTS Abu Dhabi, so she is ready now to get some more ranking points before heading to Asia for some more races.

For her teammate Jodie Simpson WTS is also “my first big race of the season”. “I’m not sure what to expect, but it will be a good blow off the winter cobwebs and start to really focus on the season ahead. The aim is to be in my best shape in August and September”, she explained.

The elite men will kick off the 2018 MS Amlin World Triathlon Bermuda event on Saturday, April 28 at 13:00 local time. The women will follow shortly after at 16:00. You can catch both races LIVE and on-demand on TriathlonLIVE.tv and follow along with play-by-play updates on our Twitter @TriathlonLIVE as well as on our Instagram and Facebook. You can also join in on the conversation using #WTSBermuda.