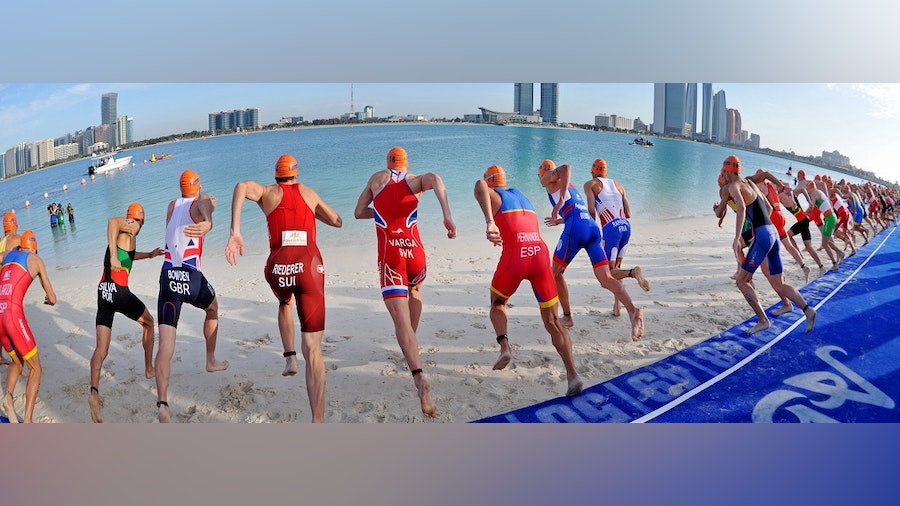 The 2016 ITU World Triathlon Series (WTS) will commence with a star-studded field this Saturday in Abu Dhabi as some of the world’s most prestigious athletes line up to jump start the most anticipated triathlon season that will lead up to the Rio de Janeiro Olympic Games. After Abu Dhabi opened the 2015 season last year as the only Middle Eastern city to ever host a WTS event, this year the modern city will see a standard-stance course contested with the top-ranked men out to earn the first WTS points of the year. The men are set to compete first on Saturday. Six of the top 10 ranked men from 2015 are accounted for on the Abu Dhabi start list, ensuring what is sure to be an action-packed start of the new 2016 season. Sitting at the top of the list is the Abu Dhabi reigning champion Mario Mola (ESP). While last year the course was positioned as a sprint distance, Mola charmed his way to a gold medal when he broke away from a small three-man pack in the final kilometres. In his final push, he recorded the fastest 5km run split in the history of the WTS, a record he maintained until he beat it himself later that year. Ending his season with the win in Chicago, he finished second overall in the Columbia Threadneedle Rankings.

South Africa’s Richard Murray had a phenomenal 2015 season and will most definitely continue his streak. Ranked fourth overall last year, he earned the bronze medal in Abu Dhabi last season. He then went on to win the New Plymouth World Cup, take third in the Rio de Janeiro Olympic qualification event where he secured his spot for the Olympics, win his second-career WTS race in Edmonton, end up third in Chicago and then finish his ITU season with a victory at the Cozumel World Cup.

Other Spaniard Fernando Alarza also hits the peak of the men’s racing. He has eight top 10 finishes in the 2015 WTS season and has a strong chance in becoming Spain’s third man to join the Olympic team, alongside compatriots Mola and Javier Gomez Noya.

Ryan Bailie (AUS), Crisanto Grajales (MEX) and Joao Pereira (POR) are the remaining top 10 ranked men set to compete in the season opener. All three men carried out strong and consistent performances through last year, ending just around 200 points of one another in the final Columbia Threadneedle Rankings. Other men to look out for this weekend and this season is South African Henri Schoeman, Russian brothers Igor Polyanskiy and Dmitry Polyanskiy and Switzerland’s Sven Riederer. Schoeman tagged himself as the man to beat in the water after dominating the swim in almost every single race he contended in last season. The Polyanskiy brothers are tough to beat on the swim and bike and are a strong duo that rarely ever misses the front pack, while Riederer has already qualified to compete in his fourth Olympic Games.

As a tribute to the late, beloved Laurent Vidal, the No. 1 position in the men’s and women’s start list has been left open.

The men will get the 2016 World Triathlon Series underway at 1:06pm on Saturday March 5, while the women will follow at 4:06pm local time. Follow all of the action live at triathlonlive.tv and on twitter @triathlonlive. Trifecta returns this year with new features. Create a new login and pick your favourites now at trifecta.usatriathlon.org.