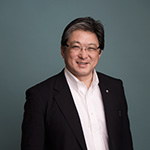 It was 1984, in the days of predawn of Triathlon history, when I was first involved in this amazing sport.

Since then, I have devoted with passion myself to the development of Triathlon in Japan and further in Asia. I put up triathlon events from the scratch and now organize approx. 300 races a year. Along with it, I have happily witnessed milestones in the Triathlon history, such as the foundation of ITU in 1989 in Avignon, the IOC announcement of Triathlon of becoming a sport of the official Olympic program in 1994, the first delivery of our events at the Sydney Olympics in 2000, and from there onwards.

In 2004 I was elected to the ITU Executive Board, and have served for the past three terms as an energetic member being engaged in the operation and decision making for this International Federation. I have contributed to the development of the sport in Asia and Worldwide. This year, I attended the Rio Olympics and Paralympics where Paratriathlon made a debut, while representing the Japanese Olympic Committee as well.

Olympian 🇫🇷 @LeoBergere had a tremendous last season, which saw him step onto multiple WTCS podiums with phenomenal… twitter.com/i/web/status/1…
Yesterday