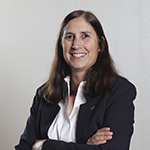 Executive Board Member (elected until 2024)

Leslie Buchanan has been involved with triathlon since the mid-1980s. She volunteered with the International Triathlon Union (ITU) putting on races, doing administrative tasks and officiating in the early 1990s. Highlights during this time were helping to create the first Triathlon Competition Rulebook and lobbying IOC members during the 1992 Barcelona Summer Olympics for triathlon’s inclusion into the Olympic Games. After officiating at the Sydney Olympic Games, Leslie was named ITU’s Technical Director and she held that position until 2008, when she was named ITU’s Anti-doping Director. Leslie is still interested in clean sport and she is a member of the Tokyo 2020 ITA Expert Group.

Leslie enjoys officiating and facilitating because she gets to work with people who are as just as passionate about triathlon as she is. Highlights of her officiating career include being co-Technical Delegate of the 2012 London Summer Olympic Games Triathlon and being co-Race Referee at the 2016 Rio Summer Paralympic Games.

Leslie is an English teacher at a secondary school in West Vancouver, Canada where she grew up. She currently is coaching the cross country and track and field teams but in her over 35 years of coaching, has coached a variety of sports including basketball and field hockey. She sits on a number of committees locally including the Parathletes Inclusion Committee for the British Columbia Secondary Schools Track and Field Commission which she also chairs.

Leslie holds a Master’s degree from San Diego State University and two Bachelor degrees from the University of British Columbia.